Paris and its many charms can all too often prove so engaging that many find it difficult to pry themselves away, which is a shame given that beyond the borders of the City of Lights, la belle France reveals herself to be diverse and complex. 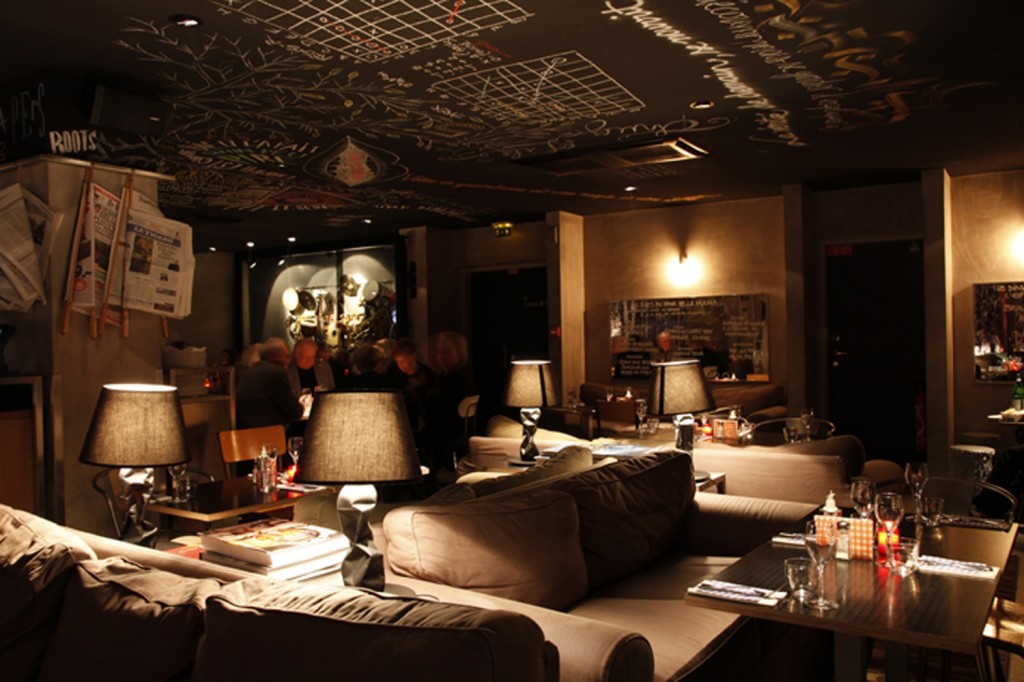 In Paris, I set up home base at the sleek, new Mama Shelter Hotel (109 rue de Bagnolet. Tel: +33-143-484848. www.mama­­shelter.com) and proceeded to spend the first half of my weekend merrily ambling around gay Paree, frequenting cafés, noshing on Croque Mesdames, and making the usual stops in and around Le Marais, the Trocadero, Montmartre, and, of course, the Champs-Élysées.

Then, on Sunday morning, I hopped on a TGV train to the Pays de la Loire. Ninety minutes later, I disembarked in Angers, the heart of the Loire Valley, just about 200 miles southwest of Paris.

It didn’t take long for me to figure out that Sundays are pretty quiet in Angers. This is particularly so in the city center where I checked into the Hotel D’Anjou (1 bd Maréchal Foch. Tel: +33-241-211211. www.hoteldanjou.fr), a cozy little three-star property with all the trappings of a luxurious private home, albeit one from another era (spiral staircase, ornate furniture, and cage elevator included).

Anxious to explore, I set out on a walking tour of the town. The rich history of the valley that was once the home of Eleanor of Aquitane and the Plantagenet kings, who ruled England from the 12th century, would later inspire Hollywood classics like Robin Hood and Lion in Winter.

My first stop was at the place du Ralliement—the nerve center of downtown Angers. Though its original charm was somewhat obscured by one of the many construction projects that seem rife across France at the moment, the Renaissance architecture and mood of the square swept me back in time. I could almost hear echoes of 18th-century crowds that once gathered to sew the first seeds of the French Revolution.

From the place du Ralliement, I meandered, taking special note of the medieval Angers Cathedral (4 Rue Saint-Christophe. +33-241-875845) perched on high with its magnificent stained glass windows that peer out over the entire city.

In the shadow of the cathedral, I stopped at the place St. Croix to examine the whimsical wood carvings that decorate Angers’ oldest house, a half-timbered, 15th-century craftsman structure known as the Maison d’Adam (the House of Adam). I peered into the windows of the 16th-century houses on the rue de l’ Oisellerie, and I even took a quick gander at the iconic sculptures in the David d’Angers Gallery (33 bis r. Toussaint. Tel: +33-241-053800) before finally landing at the city’s crown jewel, the Chateau d’Angers (Promenade du Bout-du-Monde. Tel: +33-241-86487. www.monuments-nationaux.fr).

Sweeping panoramic views of Angers and the bordering Maine River are among the Chateau d’Angers’ most alluring assets. The Chateau is equally renowned for being the home of the Apocalypse Tapestry, a staggeringly massive, seamless work so extensive it deserves hours to fully appreciate.

That evening, I dined across the street from the Grand Théâtre d’Angers at the Brasserie du Theatre (7 place du Ralliement. Tel: +33-241-241515. www.bras­­serie-du-theatre.com), which is especially noted for its selection of fresh, locally sourced seafood.

My next day was devoted to exploring the Loire Valley’s natural treasures by renting a bicycle and riding along the tree-lined, park-like banks of the Maine River all the way to its confluence with the Loire.

As a treat to myself for making such a healthy start to the day, I popped off to Château des Vaults(1 place du Mail, Savennières. Tel: + 33-241-728100. www.sa­vennieres-closel.com) for a sampling of Savennières, the Chenin Blanc wines for which Angers is best known.

The elegant chatelaine of the estate, the Viscontess Evelyne de Pontbriand, was my guide around the 17th-century chateau, its surrounding gardens, and 15 hectares of organic vineyards. Here, I sampled Do­maine du Closel’s much lauded La Jalousie, a light and fruity Chenin Blanc that more than lives up to its award-winning hype. If you get the chance, you really should make it a point to try Savennières in Angers. Unlike most Chenin Blancs, the wines from the village of Savennières are imbued with a unique mineral-like quality for which the area’s slate rock terroir is widely credited.

The next morning I began about an hour away from Angers in Saumur, a postcard-perfect town along the left bank of the Loire Valley, where homes from the 16th and 17th centuries commingle with modern enterprises. A hub of activity can be found in the town’s place St. Pierre, where restaurants and cafés brimming with local patrons buttress the Eglise St. Pierre, the square’s most historic structure. Fashion­istas will appreciate that Saumur was also the birthplace of Coco Chanel.

Lording over the city from the opposite side of the Loire is the Château de Saumur, the views from which are well worth the steep climb it takes to reach it. Once at the summit, take in the gardens and spectacularly unobstructed views down the Seine before lunching at the airy Saumur l’Orangeraie (Les Feuquières, Château de Saumur. Tél : +33-241-671288).

Saumur was once known for the tuffeau stone that was extracted from the area’s many caves for the purpose of building stately French castles and monuments. These same caves, many of which are now used to grow mushrooms and to store and produce wine, are really a must see. I elected to sample the sparkling wines at Bouvet-Ladubay (1 rue Jean-Ackerman, St Hilaire-St-Florent. Tél : +33-241-838383. www.bouvet-ladubay.fr), before continuing on to an extraordinary and rustic dinner deep in the bowels of La Cave aux Moines (Préban 49350, Chênehutte-les-Tuffeaux. Tel: +33-241-679564. www.cave-aux-moines.com).

I walked hunched over into the cool, dimly lit confines of La Cave, but the restaurant’s dining room is a warm and familial affair. From a blazing wood-fired oven in the center comes wheat-flour pastry that expands in the oven to create a perfect little pocket destined to be slathered with salted butter and filled with beans and local goat cheese. Mushrooms of several varieties, all grown in the cave, are served in a number of preparations, the most memorable of which were the ones delivered stuffed with a chunky pork pâte. Ditto for the snails, also raised in the cave and classically prepared with butter and garlic. Adding to the hominess of the experience, all dishes are served family style. 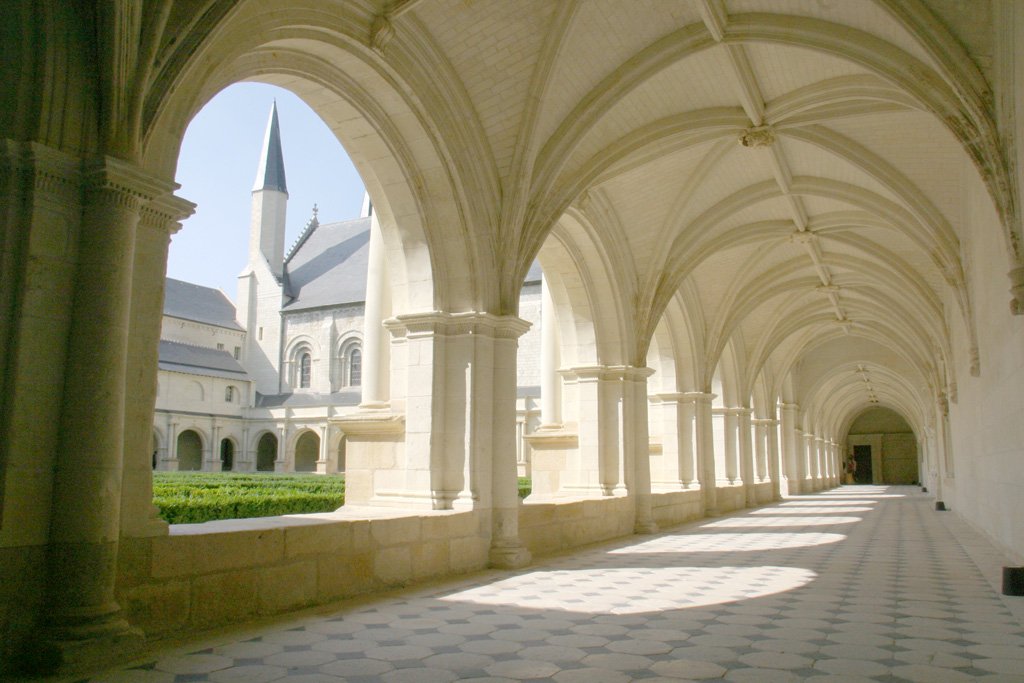 On my next to last day in the region, I got to explore the element of the Loire Valley’s history that has always most intrigued me – Eleanor of Aquitaine and her favorite son, Richard the Lionheart. At the Abbaye Royale de Fontevraud (BP 24 – 49590 Fontevraud l’Abbaye. Tel : +33-241-517352. www.abbaye-fontevraud.com) I indulged my obsession with a tour of the 12th century monastic site where Eleanor of Aquitaine lived out her final years and lies entombed alongside her husband King Henry II, and several Plantagenet kings (many now believe that the bones of Eleanor, Richard, and King Henry have been pillaged or stolen, yet their sarcophagi remain).

Then it was off to the nearby Fortresse Royale de Chinon to delve deeper into the history of King Henri II and Eleanor of Aquitane. After nearly six years of restoration, the Fortresse Royale is nearing completion and will soon offer an interactive guide system to enhance the guest experience.

For lunch, I finally got out onto the Loire River. I hopped on a boat cruise aboard the Enterprise Amaranth (37500 Candes St Martin. Tel: +33-247-958085. www.loire­terroir.com), which I highly recommend as the best way to understand the scope and reach of the valley. A pair of handsome brothers, Sylvain and Robin, operate the lunch cruises, with one doing the entertaining and the other preparing a light but filling lunch of stuffed mushrooms and fresh baked bread. Floating past villages and châteaus, the wind whipping through the boat’s sails, you genuinely sense the lush bounty of the region from a different perspective and come to understand why so many wars were fought over its control. 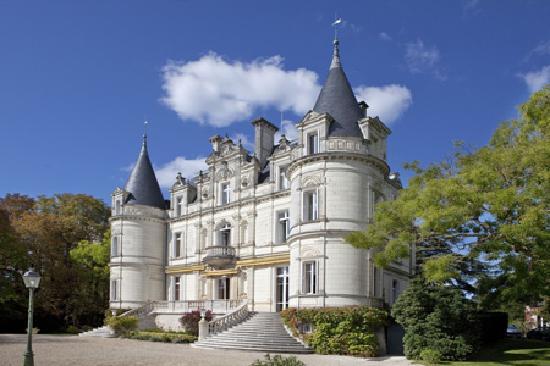 Later that night, I checked into the Chateau Hotel Domaine de la Tortinière (Route de Ballan Miré, Les Gués de Veigné. Tel: +33-247-343500. www.tortiniere.com). Spread out over 15 acres, the 19th-century chateau itself is comprised of 11 luxuriously appointed rooms, while another 24 individually designed rooms and six apartments are strategically positioned across the park grounds.

Situated as it is between the fabled Château of Azay-le-Rideau and the much-visited Château of Chenonceau, the grande luxe accommodations provide a vivid reminder of why the Loire is sometimes referred to as the “Valley of Kings.” It’s little wonder that everyone from Audrey Hepburn and Juliette Binoche to former French presidents George Pompidou and Valerie Giscard d’Estaing have laid their heads in the Château.

I ventured out early on my last morning for a quick visit to Amboise and Clos Lucé (2 rue du Clos Lucé. +33-247-570073. www.vinci-closluce.com), the final home of Leonardo da Vinci, where the history of many of his inventions, along with replicas of the same, have been collected. Following a quick stroll around the grounds of the Parc Leonardo da Vinci, I journeyed into the city and was soon sipping an aromatic cup of tea, ensconced in a booth at Bigot Patisserie (place du Château. Tel: +33-247-570446. www.bigot-amboise.com), one of my favorite places in Amboise. Opened in 1913, family-run Bigot makes seductively delicious chocolates, ice cream, and cakes, and is still run by Christiane, a silver-haired dynamo who carries on the tradition. A favorite of celebs like fashion designer L’Wren Scott (paramour of Mick Jagger), Bigot chocolates are actually shipped globally, but somehow they taste better in Amboise.

Later that evening, just steps away from the Bigot Patisserie, I tucked into a casual little boîte and wine bar called Chez Bruno (40 place Michel-Debré (Place du Château). Tel: +33-247-577349) situated at the foot of the Chateau d’Amboise. Run by a lovely and inviting English proprietress named Louisa, the fare is distinguished for being hearty and thoroughly satisfying. Think rustic paté, braised ham and cheesy potatoes, and the original Tarte Tatin first made by the Tatin sisters and sold in the woods of Sologne in the Loire Valley. The wine list is a point of interest featuring many options produced by Louisa’s husband, whose family has been making wine in Loire Valley since 1508. Even on a Thursday night, Chez Bruno was overflowing with patrons.

Stepping out from Chez Bruno into the moonlight, I reflected on the range of delights with which the last several days had spoiled me. From the urbane modernity of Mama Shelter in Paris to the intimate authenticity of the Loire Valley’s châteaux, I sensed, as always when I visit, the sweep and diversity of French life, and I vowed to never choose one over the other again. After all, why not have your croissant and eat it too?