In keeping with my plan to explore the previously unexplored, the Southern California leg of the LivingWells California road trip ended with two relatively lazy days in two oceanfront properties that had heretofore been mere points on a map to me. I, of course, already knew the chic seaside community that is La Jolla, an always favored destination of mine when in San Diego. Ditto for the Gaslamp District which has increasingly become one of the most exciting areas for me to delve into when my travels take me to San Diego.  Imperial Beach and Pacific Beach were, however, a completely different story.

I actually arrived at the Pier South Resort on the shores of Imperial Beach under cover of night on Day 11, but it was not until I woke up in the Studio Suite overlooking the Pacific Ocean that the majesty of the hotel properly struck me. As the second property from the Autograph Collection in which I’ve stayed on this tour, I’m starting to get the sense that the real autograph of the Autograph Collection has a great deal to with spectacular views in spectacular locations . In that sense (and in so many others) the Pier South exceeds expectation.

The road that leads to Pier South is lined with a residential community dotted with with strip malls, beachy corner stores and more than a few Mexican restaurants worthy of a quick, casual bite courtesy of their authenticity, given that Imperial Beach is just about five miles from the Mexican border. A quick turn at the end of that road and the Pier South Resort appears towering over a relatively unpopulated stretch of the southernmost beach city in San Diego.  Sleek, ultra-modern and eco-friendly, the LEED Silver-certified the 78-room Pier South Resort is an idyllic escape for its location alone. You could go horseback riding on the beach, hiking or biking along nearby trails or even surfing, which seemed to be quite the thing during my stay. In fact, the hotel staff is happy to arrange any of the aforementioned and indeed offered to do the same for me. However, after nearly two weeks on the road, I opted to simply relax and enjoy the view from a few of hotel’s best vantage points — the terrace of my refreshingly stylish studio suite, the pool overlooking the Pacific and the hotel rooftop.  Which brings me to the third rule to come out of this road trip experience.

Rule #3:  Though the temptation will be great to schedule every minute of your trip, never forget to schedule time to simply relax, particularly when an amazing view is in the offing.  Sure, you can sleep when you die, but believe me there’s nothing wrong with sleeping while you’re on vacation especially when you have the sounds of the Pacific lapping up on the shores to lull you into a restful slumber.

I concluded my final night at the Pier South with dinner at the hotel’s Sea180 Tavern indulging in the innovative coastal cuisine of Executive Chef Ken Irvine. I ordered the chowder and the fish and chips while my friend enjoyed a gorgeously presented and equally flavorful plate of rare mignons, but not before we sampled a smattering of delights from the kitchen that married crispy wontons with poke, pineapple and avocado in various combinations and included a delightful seaweed salad. Paired with surprisingly unique Mexican wine and beer options, the meal represented a fitting end to a seamless stay at this new highly favored getaway of mine.

En route to my next stop I popped into the RGang Eatery in Hillcrest for brunch. I had stopped by former Top Chef contestant Rich Sweeney‘s restaurant for dinner on my last stop in San Diego and he told me that if I loved dinner I would love the brunch at RGang and he couldn’t have been more directly on point. Loud, fun and super casual, brunch at RGang is like stopping by a friend’s place for a bite and the menu is just as homey and comfort driven as you might expect of the Sweeney. I ordered the decadently wonderful Jalapeno Cheddar Cornmeal Waffle and Fried Chicken while my friend had the massive Breakfast Sandy piled high with bacon, eggs, cheddar cheese, lettuce and tomato on grilled brioche. The service was as friendly and warm as ever and we both left sated, which explains why RGang has assured its place as another of new regular fave stops in San Diego. 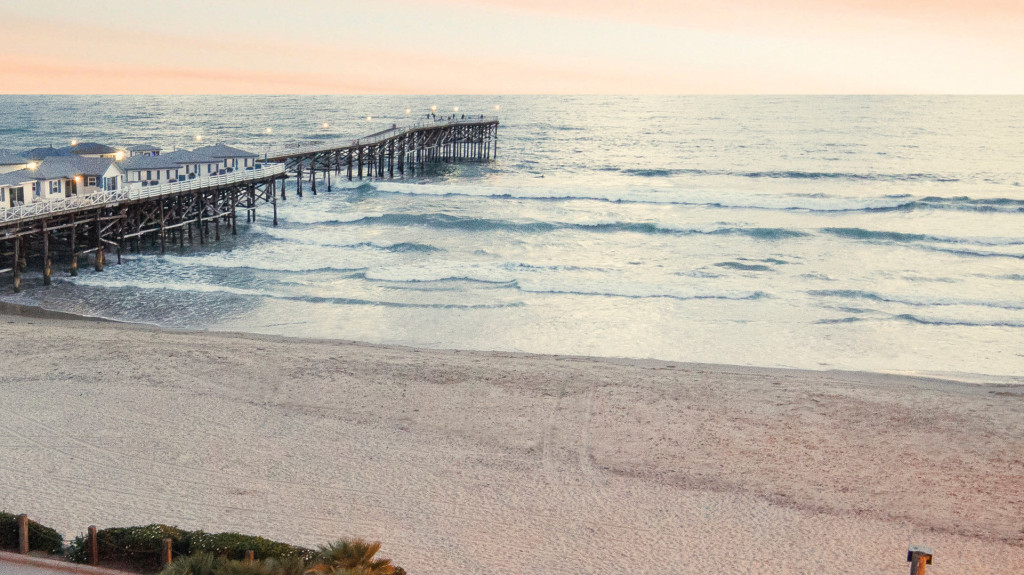 My final stop in San Diego was at Tower23 on Pacific Beach. Busy, lively and lined with beach bums of every variation, Pacific Beach is the opposite of Imperial Beach in the sense that is anything but removed from the action. In the thick of it all, Tower23 sits on corner of the busy Pacific Beach scene, with an Urban Outfitters on one side and the ocean on the other. A boutique little luxury jewel box of a hotel, Tower23 specializes in cool.

Rooms have names like Serenity Pad, Sweet Suite, Sky Pad and Spirit Pad and all have a clean, modern aesthetic and an array of state of the art amenities.  I stayed in the Sanctuary Suite, which boasted all of the aforementioned attributes along with a private patio steps away from the beach and some truly amazing views. Pacific Beach isn’t upscale La Jolla by far (though La Jolla is only a short drive away) but it is a fun, beach community with local bars lacking in pretense or anything of the like where you can let your hair down and enjoy some wings and beer and unwind which is exactly what I did with my final 18 hours in San Diego at Tower 23, which is the epicenter of hip in that corner of San Diego.

Next stop Wine Country and a whole different side of California.

A view to die for, Pier South Resort

View of Imperial Beach from Studio Suite at Pier South