If you don’t immediately recognize Trevor Wayne’s face, you might recall catching a glimpse of one of the head-to-toe tattoos that have helped to earn the alternative pop model roles on ER, Mad TV, and Living With Fran in addition to landing him modeling gigs alongside Margaret Cho, Nip/Tuck’s Willam Belli,  Project Runway’s Kit Pistol, Buffy the Vampire Slayer’s Tom Lenk, and singer Cazwell.

This month Wayne — a gay man who has also modeled in the books Down the Rabbit Hole by Justin Monroe, Shooting Male by Eric Schwabel, and the upcomingImagining Man by Clive Barker – celebrates the best of his edgy nude modeling work with the release of a controversial photo mini-magazine titled Pin-Up Show.

Featuring a selection of provocative work by a veritable who’s who of photographers including Barker, Austin Young, Thai Tai, Kaeden Stone, and Van Darkholme, the self-published Pin-Up Show presents Wayne’s oeuvre in the context of an underground art zine and promises to extend the actor-model-artist’s tattooed legend even further.

With the release of Pin-Up Show, an appearance in the upcoming Web series Svengali starring punk rock legend Tim Armstrong, and more signature works of visual pop art in progress, Trevor Wayne is clearly angling to show the world that he can be a pinup and so much more.

Not bad for a kid who grew up on a blueberry farm in Michigan and never thought of himself as photogenic before he got his big break.

Check out our interview with Trevor — and a dozen exclusive photos from his upcoming book.

Advocate.com: So Trevor how did you go from a farm in Michigan to art school in Chicago to modeling? Was it something you pursued, or was it something that pursued you?

Trevor Wayne: I got into the idea of acting when I was living in NYC. I’d be walking down the street and often get pulled into small productions. I grew to love it, and thought I’d move to L.A., where it’s warmer, and give it a shot. I never thought I’d be modeling. I still feel that’s the wrong word sometimes. I didn’t even believe I was photogenic.

I got my first set of head shots done and they turned out great. Then other photographers had interest in me, so I began shooting a lot. I started putting more effort into that for a while, recognizing photography as a new art form I hadn’t had a hand in yet.

And how is it that you came to work with Clive Barker on Imagining Man, and what was that experience like?

I met Clive through a friend who told me Clive was looking for male models. My friend e-mailed him my website address and I got a response within a few hours.

I hadn’t met Clive before the actual shoot, but we did talk on the phone. He wanted to make sure I was comfortable with the nudity and intensity of what he wanted. When I showed up for the shoot, it couldn’t have gone better.

I was a little nervous at first, but Clive is so easy-oing and charming and was even open to my ideas. We became friends right away. I was not expecting that.

Being naked, covered in fake blood and dirt was not the least [bit] awkward. There was no pressure of a goal, only experimentation. Clive isn’t afraid to take chances and fail, and as a result we got some of the most amazing photos! 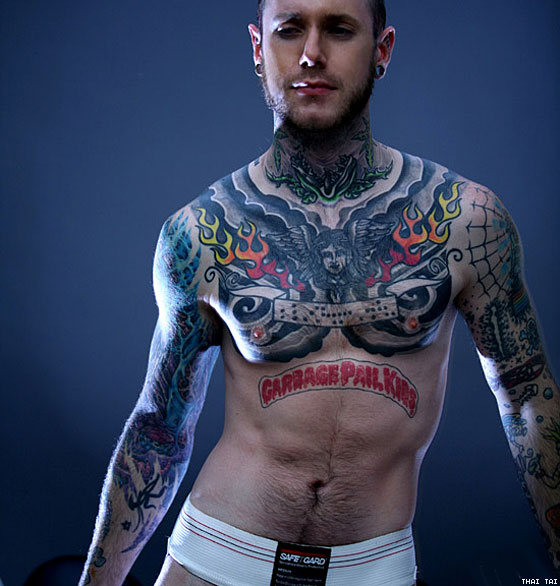 You’re now being described as Barker’s muse for his upcoming book. Is this the first time you’ve served as the muse to a high-profile photographer?

It’s the first time I’ve done repeat shooting for someone so high-profile, though I’ve worked with other well-known photographers, Mario Testino being one.

As an out model whose look challenges the mainstream stereotypes about gay men and body image, what kind of message or statement, if any, do you hope to send?

I haven’t thought too much about challenging a gay stereotype. I have tried to shy away from tattooed guy stereotypes, such as druggie or racist skinhead … though I [do] have a small part in Bruce LaBruce’s new movie, L.A. Zombie, [where] I play a drug dealer who shoots a bunch of guys. I love Bruce though, and I don’t think I need to worry about stereotypes with his audience.

I really try to just do what interests me and try not to worry so much about how people perceive me. I just want to put myself out there the way that I feel represents me best, and if some people get the wrong idea about me, well, I can’t worry about that.

Speaking of not worrying about what people think, you’re so comfortable with your body that you’re self-publishing a photo mini-magazine titled Pin-Up Show, which showcases some of your edgier nude modeling. What inspired you to do that?

But some of your work has in fact been taken very seriously because it has pushed boundaries, and you have even been called “controversial.” Where do you personally draw the line on what you will and will not do in front of the camera?

I really can’t say what I will and won’t do. It really varies by the project and my belief in it.

I can’t foresee a reason I’d ever have any actual sex on camera. That’s kind of crossing a line for me. Nude modeling is also not what I want to base my career around.

Have you ever had a request you had to turn down –regarding a photo shoot or being photographed, that is?

I will turn down shoots because I get a lot of photographers who assume off the bat that I’m willing to just get naked. Besides that, they usually don’t even offer to pay, or have anything I feel will add to my portfolio. 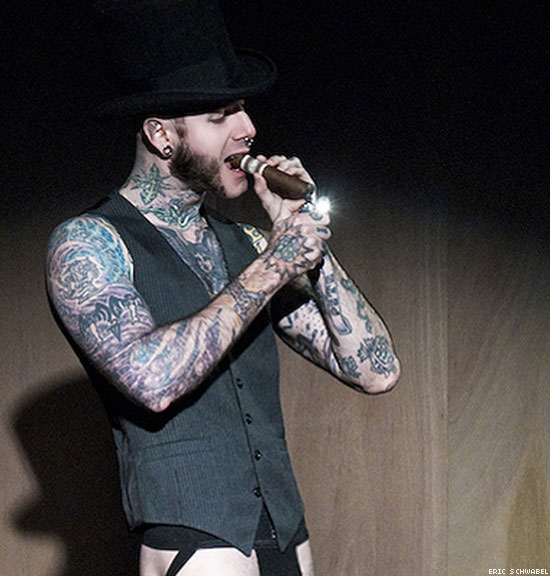 I don’t really need more naked photos of me, but if I think the project is great, then I’ll do it. I do appreciate people asking, because sometimes a rare project does come along. I just don’t want to offend anyone if I say no.

What makes a photo sexy?

I think a sexy photo has a sense of intimacy and playfulness. It’s something that makes you look twice and almost haunts you. It’s not always explicit but has something extra going on in the photo. Some mood.

And what do you find to be the sexiest body part?

I really think everyone has something that stands out about them. I know it’s cheesy, but I still think a person’s smile and laughter is the sexiest thing.

Now that you’re publishing your mini-mag, do you have any desire or ambitions to get behind the other side of the camera?

I think it’s a natural progression and very possible. It’s a little down the way, if at all. I do have some projects in mind where I’d have to be the photographer to get it done. I often come up with shoot ideas.

I feel if I were to become a photographer, I’d really have to do it 100%, and right now I’m not done with the other things in my life yet.