Judging from the bustling scene that generally greets guests who pull up to valet at The Redbury on any given night, it would be hard to imagine that this paparazzi-ready backdrop had ever been anything but. However, it wasn’t so long ago that the structure that now houses The Redbury was a casualty of the economic downturn, languishing in the shadows of Hollywood’s iconic Capitol Records building. Originally conceived as a condominium complex, the building was stuck in real estate purgatory—unfinished and unsaleable—until it was reborn thanks to the joint vision of sbe founder and CEO Sam Nazarian and visual auteur Matthew Rolston.

Rather than break up the condos to create more standard-sized hotel rooms, Nazarian and Rolston opted to keep the rooms (which are referred to as ‘flats”) at the original sizes of the condos, which means the smallest flats (Flat A) are 750 square feet, the one-bedroom mid-size flats (Flat B – The Hollywood Premiere Flats) are 850 square feet and the four Redbury Signature Suites (Flat C) have two bedrooms spread over an exceptionally generous 1,020 square feet. 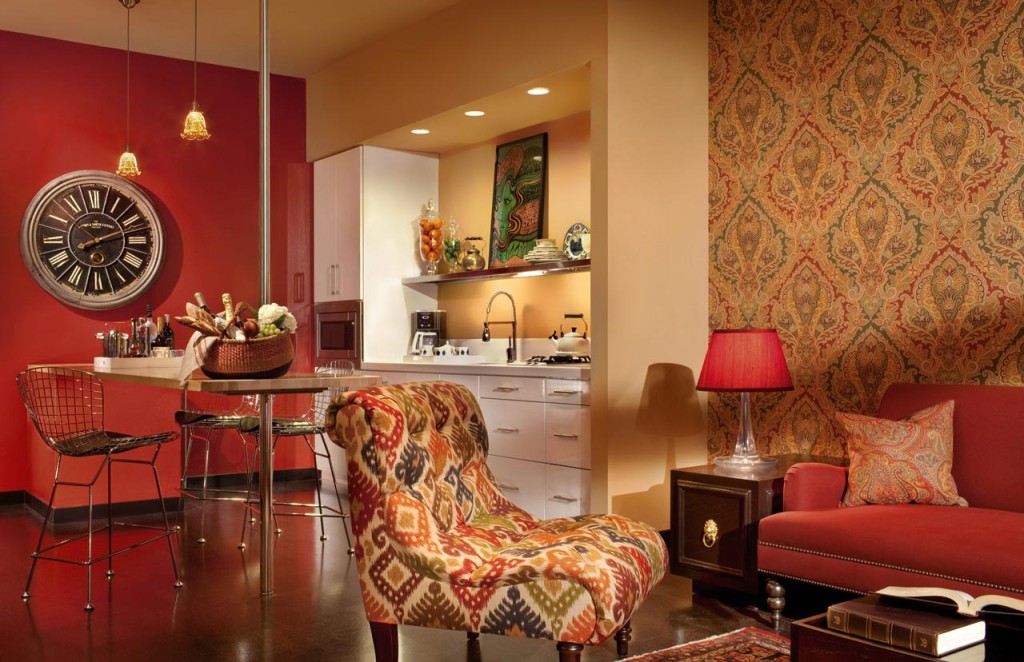 To put that into perspective, New York Mayor Michael Bloomberg recently launched an initiative to build new apartments in Manhattan that would average 275 to 300 square feet, just a little more than a third the size of the smallest room at the hippest destination in Hollywood. Needless to say, the flats at the Redbury are supersize by comparison. But the size of the rooms is perhaps the only area in which the Redbury seems “supersized” in any way—and that is a very good thing.

As a boutique hotel with just 57 rooms, the hallmark of The Redbury is service, and the experience of the hotel is intimate from the very first encounter. Rather than a massive check-in desk in the lobby, there is a simple, discreet area on the second floor where guests are welcomed and shown to their perfectly appointed rooms, in which Mr. Rolston’s flair for visual stimulation is in full bloom. 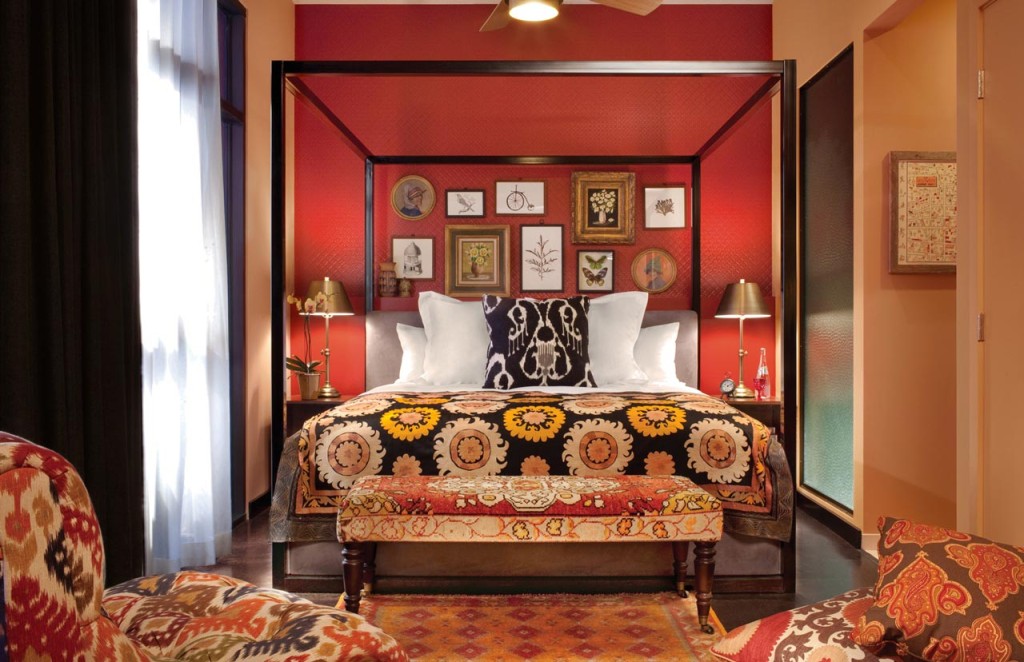 In every room, vintage rock ‘n’ roll posters and Persian rugs abut brightly colored walls and boldly patterned furnishings. Meanwhile, amenities like full European-style kitchens with oversize work islands, washer/dryers, floor-to-ceiling windows, vintage vinyl record collections with record players and private balconies and patios, which would be rare finds in other properties, are standard fare for each room at The Redbury. Put simply, this is a hotel that represents the ultimate in livability, which probably explains why when guests arrive, they tend to stay a while, and repeat customers are the norm rather than exception.

Complementing all of the above are uniquely sbe guest favors like preferential (translation: VIP) access to the brand’s signature Los Angeles assets, including Bazaar by José Andrés, XIV by Michael Mina, Katsuya, The Abbey and the Ciel Spa at SLS. All that aside (and that’s a lot to put aside mind you), I am of the opinion that the greatest treasures The Redbury has to offer are right on its premises rather than beyond them.

The Glade, the hotel’s lush courtyard area with its Moorish accents, is a brilliant place to enjoy cocktails in the heart of Hollywood. Bordered by the dimly lit, sturdily masculine Library Bar, The Glade is perfectly happening (meaning not annoyingly crowded) on evenings and weekends, and it has just that hint of exclusivity that gives it a great buzz. Meanwhile, Cleo, the Redbury’s premier dining experience, is perhaps the breakout star of the property. 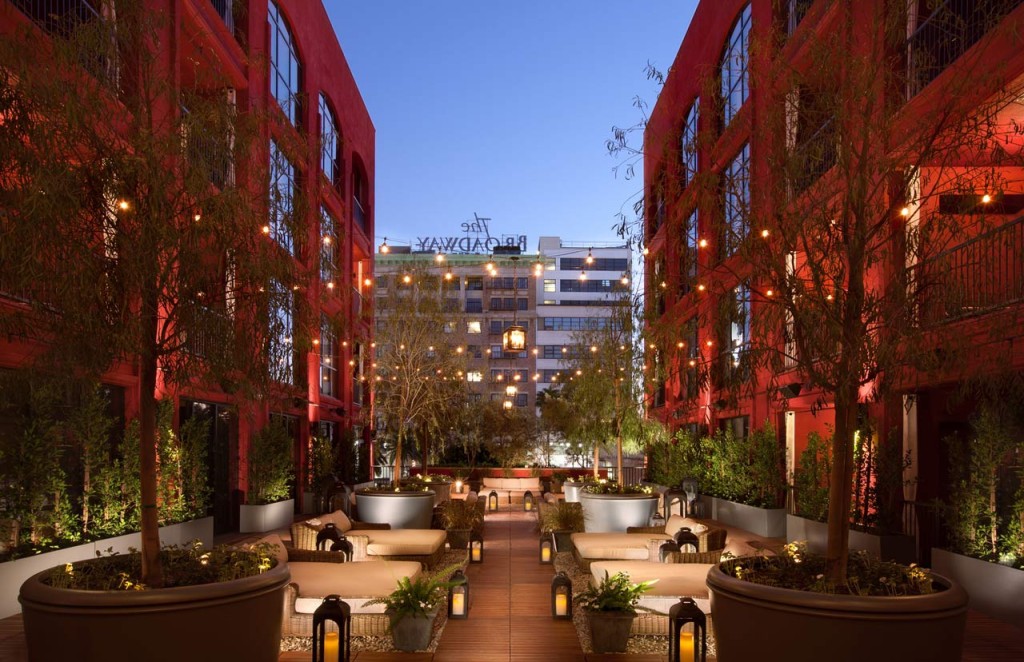 With Cleo, chef Daniel Elmaleh has created one of the best new restaurants in Los Angeles. Now, I readily admit that I make that call with prejudice, because I am a huge fan of Mediterranean cuisine. But I would challenge you to sample the mezzes (small plates), the raw bar, the homemade Laffa flatbreads or any of the dishes prepared in the restaurant’s signature stone oven and not have a transcendent epicurean moment. Start with the Brussel Sprouts—and trust me when I say these are not your mother’s brussel sprouts. Fried crispy with capers, parsley and almonds, drizzled with red wine vinaigrette, this is the best starter I’ve discovered in ages.

Then, on the Mezze menu, try the dips—the Babaganoush, the Lebaneh with Feta and the Cucumbers with Yogurt—which are served with warm pita bread, the “Cigars” stuffed with Merguez sausage and the lamb, chicken and beef kebabs. All are simple but amazing in flavor. Next move on to a flatbread like the artichoke with crushed potato, wilted Arugula and aged mozzarella, or the Merguez with caramelized onions and peppers and smoked mozzarella. And then maybe sample a salad (the chopped salad is an excellent choice), but by all means try one of the dishes prepared in the stone oven—a tagine of beef cheek, mussels or fish perhaps. For what it’s worth, I recently ordered the lamb and it was just a beautiful, perfectly balanced dish—definitely the highlight of the night.

For guests of The Redbury, there is a 24-hour in-flat dining menu that has been created by Chef Elmaleh. Now if that, along with all the other bells and whistles The Redbury has to offer, doesn’t make you feel at home in Hollywood, I’m not quite sure what will.

Update: The Redbury Hotel has closed. 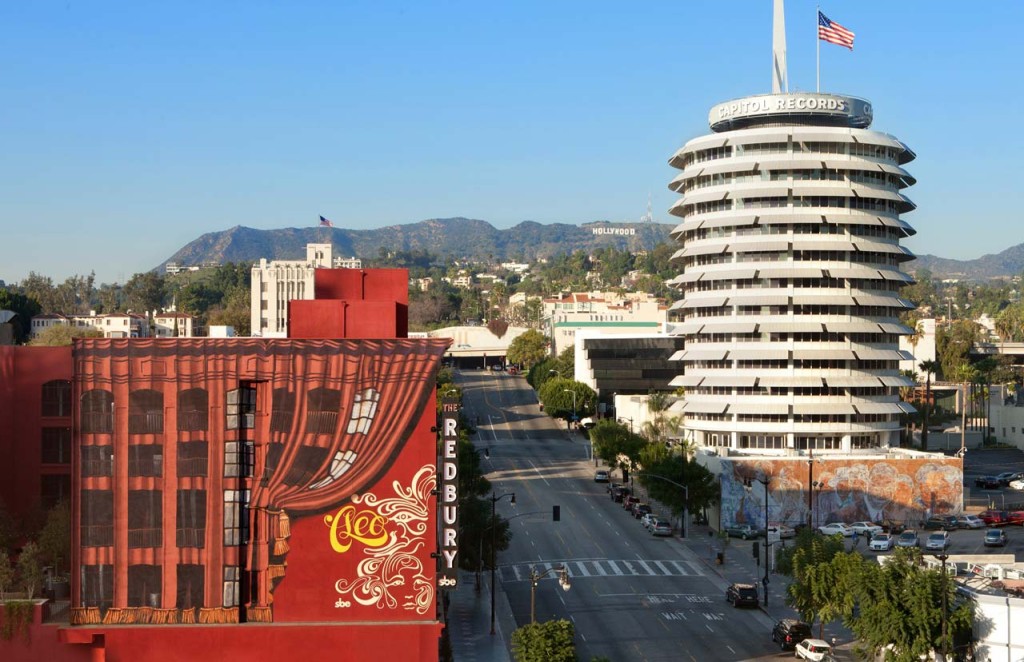