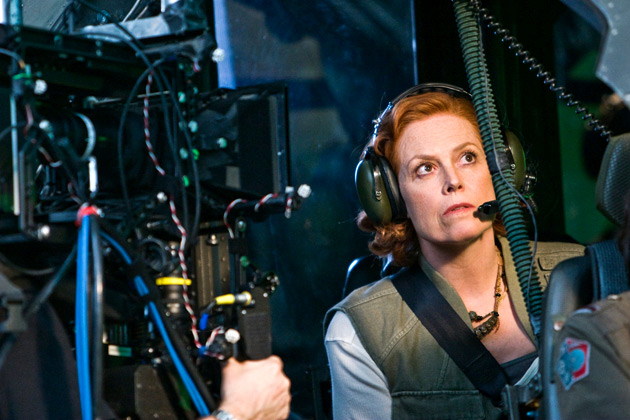 When Sigourney Weaver and James Cameron teamed up to make Aliens, they made movie history in the process. Now, with a string of impressive solo accomplishments behind them both, the Oscar-nominated actress and Oscar-winning director are back together for Cameron’s highly anticipated Avatar, which promises to break new ground in filmmaking once again.

Shot in 3-D and utilizing revolutionary new CGI technology developed especially for the film, Cameron’s Avatar tells the story of Jake Sully (Sam Worthington), an ex-marine in a wheelchair who discovers a new life as an avatar when he is recruited to join an expedition to the moon Pandora, where corporate interests are strip-mining for a mineral worth $20 million per kilogram on Earth.

As an avatar — a genetically grown remote-controlled body mixed from the DNA of the humans and the DNA of the Navi, the inhabitants of Pandora — and with the help of Weaver’s character Dr. Grace Augustine, Sully regains the ability to walk and embraces his adventurous spirit as he seeks to infiltrate the Navi clan in order to convince them to move on as the U.S. military program encourages them to do.

On the surface, the film may sound all futuristic and high-tech, which it is. But Weaver wants filmgoers to understand that at its heart, this movie is more than your average sci-fi adventure.

“Avatar is a very beautiful, primeval, primary story with creatures and places and huge battles and things like that, [but] one thing that Jim [Cameron] is not is cynical,” the actress says. “There’s nothing modern and cynical about this story, and I hope people enjoy the old-fashioned-ness of it. I used to love settling into my seat and then it would say ‘David Lean presents’ or something like that and you’d know that you were going to be taken care of. You’d know that you were going to be taken to someplace and something was going to happen to you that you would be thinking about for days to come, and I feel like Avatar is that kind of movie.”

Smartly dressed in a black Bottega Veneta dress, Fred Leighton jewelry, and Yves Saint Laurent pumps, the statuesque Sigourney Weaver sat down for a chat with Advocate.com about her new role in James Cameron’s latest megafilm, how she feels about being thought of as sci-fi icon, and why she thinks that come Oscar time, Avatar just might score an armful of little golden statuettes.

Advocate.com: So right off the top, you’ve made lots of movie magic with James Cameron in the past. How was it to be working with him again, and was anything different this time around?
Sigourney Weaver: Well, it’s wonderful. I think we picked up right where we left off, except I think he’s merrier now. He’s very happy and he has all these kids and he was so excited about working onAvatar and so excited about working with each of us. He’s really a very gentle, encouraging director. [He] always makes you feel good about what you’re doing.

He’s still a taskmaster with technicians, but he’s great to work with. I wouldn’t want to say he’s mellowed, because that sounds like he needed to mellow, but I think, as I do too at my advanced age, we enjoy [the work] more because we know that the opportunities to do this kind of work are few and far between, and this felt like one of those jobs where it was fantastical and it was all new and it was about something, so we just scored totally.

I think [Cameron] had that feeling all the time. It’s incredibly ambitious what he’s done and he’s given every ounce of himself to it.

In this film you play Grace, this tough, hard-edged botanist who
doesn’t seem to suffer fools gladly. Describe Grace’s journey in the
film.
I think when you meet Grace she’s hoping to have Jake’s brother Tommy, who’s a very, very promising scientist, arrive and help her crack this mystery about Pandora so she can get the company … or the corporation … to stop mining and protect this world that she loves so much. Then it turns out that Tommy’s dead and been replaced by this ex-marine Jake [Sam Worthington] who clearly doesn’t have a scientific bone in his body, and I think she’s furious.

And so in the course of the story … [Grace] gets thrown together with Jake again and again and I think they both fall in love with Pandora. And in the end [Jake] really ends up teaching Grace how to fight because she’s in this sort of holding pattern — she can’t leave Pandora, but she’s continuing to work for this company she hates.

Where would you place Grace in the spectrum of strong female roles you’re portrayed?

Well, I would think pretty close to Dian Fossey [Gorillas in the Mist] because Dian could be very, very tough on people and tough on herself, and I think Grace is the same way.

Your costars Sam Worthington and Zoe Saldana both had to train almost nonstop because of the physical demands of their respective roles in Avatar. Did you have to train equally as intensively for the scenes in the film when you‘re in avatar mode?

No, I didn’t. I don’t have to do quite as much as Sam and Zoe … flying and swooping and all that stuff.

So you still stay in pretty good shape naturally then?
I try to. I have to work a little bit harder than I used to, but I like being physical. I like to hike and swim and all that stuff, so it wasn’t that difficult.

Speaking of your costar Sam Worthington — he has been tapped to become one of the next big things in Hollywood on the heels of his two major blockbuster films this year. What did you think of working with him and James Cameron’s choice to cast him in this film?

They worked so well together. I think what Sam brings is he’s so mischievous and sweet and merry and warm … there’s something so lovable about him. And when you see him as Jake, he just takes all of the starch out of the hero and just is this very magnetic person that you root for.

Jim, I think, had to fight to give him the part because he was completely unknown, and I think he made a wonderful choice. And Sam worked so hard. I think he’s in every frame of this bloody movie, and when I saw it I couldn’t take my eyes off him.

Because of your roles in films like Alien and now Avatar, you’ve been called an icon of the sci-fi genre — sort of the queen of sci-fi, if you will. What do you think about that designation?

I don’t really think about it. [Laughs] I mean, I sort of blame Ridley Scott and Jim Cameron for all of that. [Laughs]

You know, Ridley loves women and respects women, and I think he made Alien what it was [because] he let Ripley just be a person. He set it up so that with Ripley all I had to do was just be. Most women who play action figures have to wear tiny little clothes and all this other stuff. All I had to do was be an intelligent, breathing, feeling entity, and he captured it.

Interestingly, early sci-fi showed humans being threatened by aliens, but in Avatar aliens are threatened by human beings. What do you think accounts for this shift in contemporary perception?

It’s interesting because I think with every decade our view of what aliens are changes. In the ’50s it was guys with big heads … and this year in District 9, the aliens were much nicer than the humans.

Jim said a very interesting thing at Comic-Con. He said science fiction is the exploration of what it means to be human, so I think it’s interesting that in our movie, the people one can learn the most from are not even human, and I do think it goes along with the whole underlying environmental message of the movie, which is respect for species, respect for nature, and respect for what we don’t know, can’t control, and don’t understand.

James Cameron says that Avatar is a movie that “has everything.” Having worked with him before and knowing his stellar track record at the box office, how do you think this film will stack up to everything else he’s done, and do you think there might even be an Oscar nod waiting in the wings for this movie?

Yes to all of your questions. I think it will be his most successful movie.

You say that with such certainty. Why?
Avatar has changed my understanding of what filmmaking is and what filmmaking can do. Turn on this movie and you will go to Pandora. Some people can go places without even being in a theater [laughs], but this is going to take everyone there whether they want to be there or not.

To me, I can’t believe a film can do this, and we’re all aware that we are a part of something that is going to have a huge impact. You can sense that we’re stepping over a threshold into a different way of making a movie. I think there’s no end to this technology and what this will do for us.

Final question. There has been buzz about a sequel to Ghostbusters and maybe a prequel to Aliens. What’s the skinny? Will you be involved?

I think there are a couple guys who want to make a Ghostbusters with younger ghostbusters and I think everyone has said fine go ahead. I think Bill [Murray] might be in it and I just said that maybe my son Oscar could have a part in it, but I don’t think any of us are really any it except for Bill.

And the Aliens prequel?

I have no idea. I can only imagine that they’re going to back to the planet from which the original ship came from. But I won’t be in the prequel. [Laughs]