A few weeks ago, I tripped down to Nolita to sample the much vaunted creations of Chef Roberto Hanechak and owner/culture connoisseur Hemant Phul (Masala Times, Earth Nightclub). After many visits to Spain and in keeping with my unfettered fascination with the growing tapas trend across America, I was particularly enticed by the enthusiastically innovative Plan B menu that promised Oxtail, Rabbit Meatballs, Eel, Shrimp Heads, Duck Hearts, Crispy Pigs Ear, Python Sausage and “the people’s foie gras” Bull Testicles. Be still my thoroughly adventurous heart.

The wickedly eclectic menu at Plan B is anything but random. In fact, finds its inspiration can be found in the division of cattle that was the order of the day in ancient Rome. While the nobles ate the choicer cuts from the cow, the proletariat could afford only what remained, inner organs, hooves, heads, tails, glands, brains, sweetbreads, even testicles and that was called the fifth quarter; hence the “fifth,” meaning useless or worthless, as in “the economy’s fifth wheel.”  In a story that history has dictated over and over again with the passage time, it wasn’t long before the “inferior” cooking of the people became renowned citywide and evolved into dishes for connoisseurs. Once considered meat of poor quality, these cuts are now considered delicacies that restaurants and their patrons eagerly enjoy. Et voila Plan B is born. 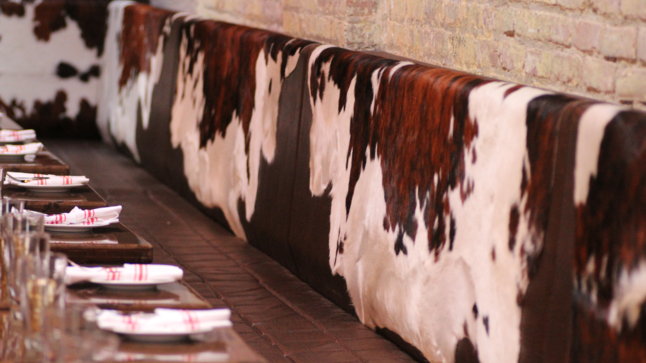 When I arrived at the eatery, I discovered a dimly lit restaurant brimming with eccentric touches that combined to create a surreal atmosphere that was more than the queerily quirky equal of Plan B’s “creatively twisted” menu.  Custom-made tables rested on concrete floors as 20-foot ceilings with skylights soared above and Gaudi-inspired iron window panels added to the sense of whimsy in the space. Jutting out into the center of the room is a bar created out of lava rock from which a menu of hand-crafted cocktails and an impressive selection of sherries, vermouths, Port, Spanish and French wines and craft beers from Spain and Corsica are poured. It is at once a thoroughly downtown setting that is equally evocative of urban Bilbao or a Barcelona streetscape.

With our wine ordered, our adventure into Plan B’s wild world of Northern Spanish Tapas began with Marinated Olives and Shrimp Heads sautéed with spicy chilis. While the olives recalled the brininess of the Mediterranean, the Shrimp Heads delivered a delightfully spicy punch to the start of the meal that helped me finally understand why my family down South has always preached the flavorful value of the delicacy. Dunking bread into the rich shrimp  broth was an added bonus.

Next up was a hearty portion of airy Rabbit Meatballs in a demiglace topped with grated Manchego cheese and a serving of perfect pillows of brioche stuffed with roast pork, Serrano ham, Swiss cheese, pickles, and lemon aioli otherwise known as the Pork and Serrano sandwiches.

Artfully presented Duck Neck on Tostadas and Paella Shooters of mussels, shrimp, clam, chorizo, white wine and shellfish broth followed.  As did Squid Ink Paella filled with scallops, sepia, shrimp, fish stock, wine and garlic that recalled the best I ever sampled in Spain and the Quail which was perfectly balanced with a Pomagrante molasses laquer and frisee.

Since they were out of the Python Sausage on that night, I opted to try the Bull Testicles which are simply marinated and seared and served sauteed watercress. The description might deflate the squeamish but the flavor defies the expectation sort of like Plan B. No this ain’t your run of the mill of tapas joint…it’s so much better. Bring your imagination and your appetite and prepare to be wowed on every level.