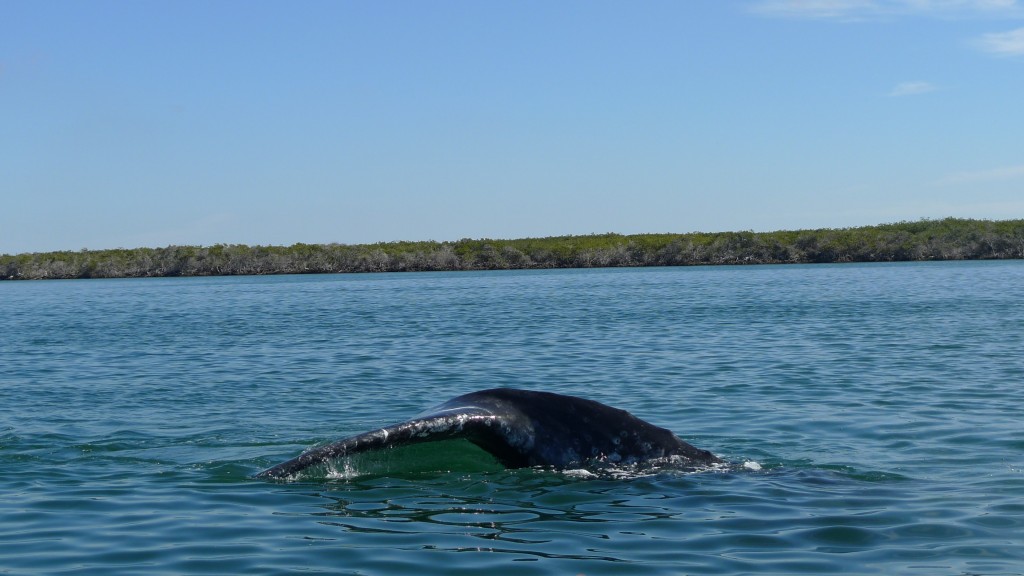 So…leaving the comfortably lovely Costa Baja Resort in La Paz, Mexico at the ass crack of dawn for a four-hour drive to Magdalena Bay to float amongst the whales was not to my thinking an ideal beginning to a traditional Living Wells sort of experience. That would be an understatement, to say the least. But that is exactly what I did, though as usual, I had no idea what I was getting myself into. 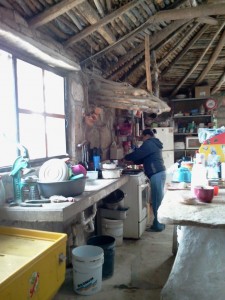 The drive through Baja from La Paz to Magdalena Bay was dusty and uneventful for the most part, with the exception of a bathroom stop along the way at a thoroughly authentic spot called Dolores’ in the tiny little town of Los Bacitas. I describe this stop as eventful for two reasons. First, it was the only time in my life I’ve been asked to take a bucket of water from outside into the bathroom stall with me so that I could dilute the contents of the bowl after I had completed my…er uh.. business. Yes folks,  there was indeed a toilet (which I was told I was lucky to find as opposed to a hole in the ground), but alas it was a toilet that did not flush. I held my nose (literally), did what I had to do and chalked it up to one of those “when in Rome” kind of experiences and thought nothing more of it — until now that is.

The second thing that made the stop at Dolores’ so eventful was the delicious Burrito Machaca that the matronly Dolores, dressed in a colorful apron, whipped up for me while I meandered around her rustic “restaurant”. In truth, the place felt more like her kitchen table judging from the clothes hanging on the line just outside the kitchen window, the dogs barking and the dishes stacked up on the sink in the open air space. To say that I had to shutter a healthy fear of  contracting “Montezuma’s Revenge” before I chowed down on Dolores’ burrito would be putting it mildly. But after the first bite, those fears went away. That combination of salty shredded dried beef, fresh tomatoes and diced onion all wrapped up in a homemade grilled tortilla was the best thing I ate the entire time I was in Mexico. In fact, I still dream about it. I had sampled a Burrito Machaca before but nothing like this. This Burrito was Victoria Beckham MAJOR kittens!

Anyhow…on to the whales! We arrived at Magdalena Bay where California Gray whales migrate each winter to canoodle and give birth. It was here, against the backdrop of this spectacle of nature that I received my second surprise of the day and before you even hazard a guess, it wasn’t a surprise on the order of the new Hermes Arion Weekend Bag. It was instead that our whale watching tour of Magdalena Bay would not take place on a power boat or anything even remotely close. No ma’am, we were going whale watching in a wooden panga boat which I can best describe as a rowboat with a motor. For the second time I gulped and told myself to get on with it. 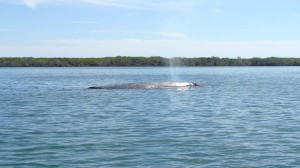 To my surprise, it was all fine. In fact it was extraordinary because our wonderful guide was clearly in tune with both the Bay and the whales. After navigating our boat out into the water, he turned off the motor and we would sit quietly in the stillness of the Bay and wait for the enormous creatures to emerge from the depths, often times so close to our boat that we could almost touch them. Then we’d race alongside the whales for awhile until they decided to dive again. The cutest thing ever was when the mama whales swam proudly beside their newborn calves as they adjusted to using their spouts and doing the swimming thing. Aw. Even for a committedly indoorsy kind of guy like myself, I have to say it was all pretty breathtaking to behold…even if I had to get up at an ungodly hour to claim the adventure as my own.

MoxieQ Rating:  “Who would have thunk” Revelatory