“The most important thing is that they say they are moved because if they are moved it means that the film hit some part of their memory and that at some point it feels real. And that’s enough.” – Gaspard Ulliel on what he hopes the surviving members of Yves Saint Laurent’s circle would say about his portrayal of the French fashion icon.

Steps away from the trill of the Champs-Élysées, in a mansion on Paris’ eternally fashionable Avenue Marceau, remnants of Yves Saint Laurent’s legendary career are elegantly curated across a parade of salons in the very space from which the celebrated designer revolutionized fashion for over three decades. The storied haute couture atelier, the intricate sketches and even the sumptuous lounges where a generation of well-heeled ladies-who-lunch would notoriously ante up staggering sums to acquire their very own pieces of the magic and fantasy of YSL are all on full display at the The Fondation Pierre Bergé – Yves Saint Laurent – a must stop destination in the City of Lights for any self-respecting fashionista.

But for all the intricate detail a visit to this orderly and pristine temple of sartorial splendor weaves into understanding the work of the artist acclaimed as one of the world’s last great couturiers, it scarcely raises a hem on discerning the complexity of the man behind the myth. Enter director Bertrand Bonello and his stylishly gritty new film Saint Laurent to fill the gap.

Laser focused on what is arguably the most important decade of Yves Saint Laurent’s professional career (1967 -1976), Saint Laurent explores with extraordinarily exacting detail the world of 1970’s Paris, which was, for Yves Saint Laurent like most of the era’s luminaries, filled with contradictions. Weaving through the haze of a boozy, drug-fueled journey characterized by order and chaos, love and obsession, creation and destruction, sex and humiliation, the film recreates the hedonistic vibe of a Paris that no longer exists, while giving birth to a portrait of Yves Saint Laurent that is at once human and simultaneously otherworldly. Which is just as Bonello, the film’s co-writer and director, intended.

“The fact that [Yves] was so fragile and strong at the same time and so much burnt by the desire of creation…that was something that really hooked me,” a mildly jet-lagged Bonello explains over an espresso at The London Hotel in West Hollywood.

“My intention was not to tell the story of Yves Saint Laurent’s life. For that you have books, you have Wikipedia, you have documentaries, you have everything,” the director continues. “So you have to choose something very personal and say this is my piece of the puzzle. You cannot draw the whole picture. That would be very pretentious. So my puzzle is this…I decided to focus on [the question] –What does it cost every day for Yves to be Yves? — Rather than how Yves became YSL. What it costs him to be him every day is much more interesting for me.”

At the center of Bonello’s glorious puzzle is the film’s star, former Chanel model Gaspard Ulliel, who bears a striking resemblance to the film’s namesake – a fact that ironically nearly cost him the role. “I was very keen that his resemblance to Saint Laurent should not be the sole factor, so I met with Gaspard, as I did with another twenty or so actors,” Bonello says of his casting process. “For three months, we shot tests, mainly to see if we could work and communicate together.”

In the final analysis, Ulliel, prevailed in winning a role that his performance heralds as his destiny. That the Paris-born actor – a scion of fashion industry parents whose mother actually worked on one of YSL’s shows at the Pompidou Center in the 90’s – had previously been short-listed to star in a Gus Van Sant-helmed film about the life of Yves Saint Laurent that never happened, only confirms the foreshadowing of his selection for the part that he now says he initially found “daunting”.

“At first I was terrified,” the model turned actor says with a disarming humility that belies his boy-next-door charm. “It was a real challenge portraying such an iconic character who is still very present in today’s society and in people’s minds and memories.”

Ulliel’s fears were allayed, however, as he delved into his research and lived with the character of Yves Saint Laurent day in and day out for over nine weeks of shooting, refusing to break character even at home for fear that he might lose even an ounce of the energy he so deftly channels from the fashion maestro whose spirit he inhabits with such aplomb in the film. Along the way, Ulliel found similarities between his own life story and that of the myth he portrays.

“As an actor, when you’re offered a part, on the first reading of the script you immediately feel if there is some kind of connection with a character or not,” Ulliel says of his relationship with the film’s subject. “In this case, I could straight away feel that there was something echoing between the character and me. It’s about creation, art, relationship to the outside world, how we deal with celebrity…and there’s also this shyness that Saint Laurent can have – this idea of isolating yourself some time. I’m an only child and as a kid I could be very, very shy …kind of in my own bubble. I don’t think [Saint Laurent] was completely shy. Sometimes I think this was just a posture for him. [But] there were many themes [in the film] that were directly talking to me.”

Posture or not, Ulliel’s connection to Saint Laurent is evident in even the tiniest gestures and subtlest emotions he conveys in the glamorously decadent on screen world carefully crafted by Bonello to include everything from the meticulously reconstructed art-filled rooms of the famed Rue de Babylone apartment shared by the iconic designer and his long-time partner Pierre Bergé to the couture creations from YSL’s emblematic Liberation collection in 1971 and Russian Ballet collection in 1976, both of which had to be recreated over the course of several months by scores of craftsmen owing to the fact the filmmakers were not granted access to the collections for the film’s runway scenes.

Given the attention to detail in the film, it seemed only natural to ask Bonello whether his goal with Saint Laurent was to have moviegoers walk away from the film with a better understanding of the man he describes as “the last great designer for his kind” or a greater sense of the mystery behind the man. It is a query that the director responds without the slightest hint of hesitation.

“Mystery and understanding but not by having answers,” he states unequivocally. “Understanding by what you feel yes but answers no. For me mystery is always king, because mystery is the key to desire.”

That said, perhaps it is the film’s star who best sums up the message of the film and the legacy of the man who inspired it. “Saint Laurent is someone who maybe ended up doing what he was doing at the exact right moment in French history…[and] in fashion history,” Ulliel offers. “The film is about this world that is changing and this industry that is changing. In the end, I realized that maybe one of Yves Saint Laurent’s greatest abilities was being able to seize the essence of an era and respond to it in his fashion.”

Now you be the judge.

See the film and the next time you’re in Paris tripping along the Champs-Élysées, nip over and give the The Fondation Pierre Bergé – Yves Saint Laurent a second look. Beyond the fashionable and chic veneer of the manse and its elegant accoutrements, you might just glimpse an alternative vision of the grit and glamour behind the most historic of a fashion icons. 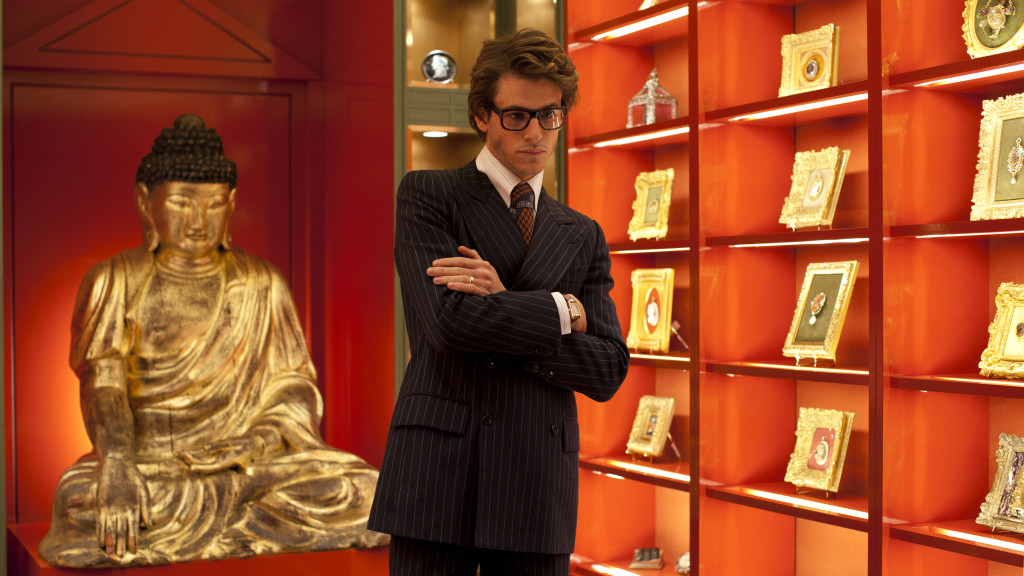