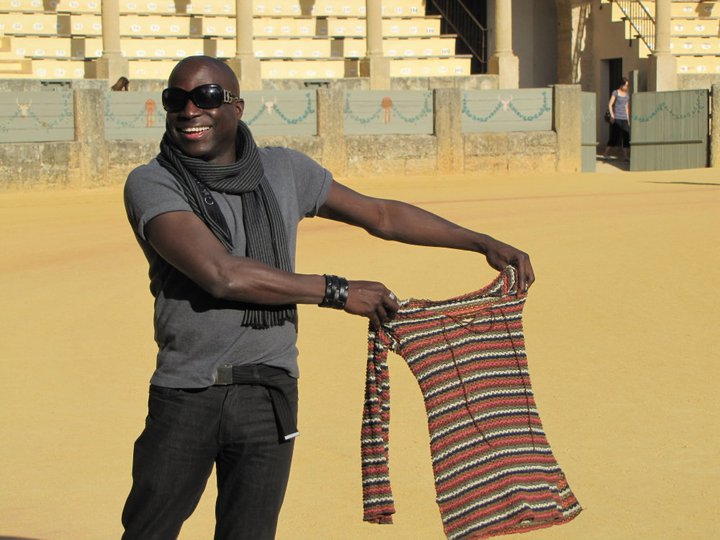 Okay so before I begin to wax poetic about my love affair with Spain, here’s a little truth. Yes, I have broken a limb and been hospitalized in Madrid for nine days (and yes the limp is finally gone thank you very much). And yes, it is also true that I was once evacuated from the airport in Ibiza because of a bomb scare and nearly struck down by heatstroke. And yes, there was that one time I barely survived an open air tour of a bull farm in 110-degree temperatures in Sevilla before touring a bullfighting ring in similarly sweltering conditions. But, all that aside, I can honestly say that I not only need Spain, I love Spain! And that says so very much, does it not? It’s all because Spain is an enigmatic destination with experiences tailor made for every personality from diva to homegrown crunchy granola girl.

As I type this missive, I am literally raising a glass of Cava (that’s Spanish sparkling wine to the un-initiated) to this country that I have developed a very special and chummy relationship with over the last several years. Like most memorable relationships, my affair with Spain has been simultaneously complicated and tempestuous, but clearly never boring or lacking in adventure as the myriad of experiences I described vividly illustrates. Now, on to Ronda.

I like to think that Madonna and I have quite a bit in common. We’re both Anglophiles with nearly authentic faux British accents, we both prefer younger men (preferably models), we’re both spiritual beings, we share a disdain for hydrangeas…the list goes on and on. Take away her millions, her #1 hits, her gold, platinum and multi-platinum records, her awards, her international superstar recognition, her gender and her ethnicity and Madonna and I are practically the same person. It’s honestly shocking how similar the Material Girl and I really are. So with that understood, it will come as little surprise then that Madonna and I also share affection for a town called Ronda in Malaga.

Remember Madge’s Bedtime Stories album and the hit songs “Take A Bow” and “You’ll See”? If you don’t have a crystal clear recollection of those Spanish flavored cinematic treats, take a look at the videos below to refresh your memory. Now this is important because both videos were shot in Malaga. More specifically, “Take A Bow” was shot in historic Ronda, which is not only one of the oldest cities in all of Spain, but also home to one of the country’s oldest bullrings as you might remember from the video. 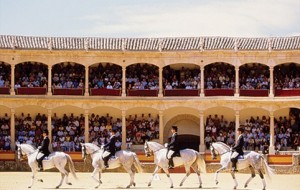 Like Madonna, I was drawn to that old bullring in Ronda myself. I even stepped into the middle of that centuries old ring (sans the bull of course) and pretended to be a matador waving to the crowds, basking in their adulation (all of which led to a very interesting appointment with my psychotherapist after but that is a story for another time). The point is that, Ronda’s bullring is one of the many sights that make this town, whose roots can be traced back to Roman times and beyond, worth skipping a day of sun, shopping and vice on the Costa del Sol.

While in Ronda, check out the Puento Nuevo Bridge, an architectural wonder at the the heart of the city that traverses a deathly gorge over 320 feet deep.

Then, once in the grand old city take in the charm of the city’s museums and shop along the Calle Espinal, which is chock full of eclectic stores that transcend generations. 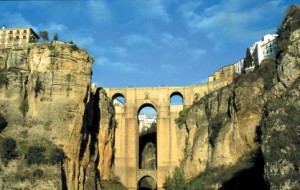 Be sure to give the shoes a good look because the city’s cobblers are famous for their wares. I got a pair of boots there dirt cheap (and the best part of all is that I get raves about those boots everywhere I go…oh vanity thy name is Duane! It’s sad but true). Then after a day of shopping, touring and bullfighting, sample the best Andalusian cuisine and wine over a stunning meal at the Paradores Hotel with its spectacular views of the gorge and the Puento Nuevo Bridge.

Now if that doesn’t sound like a day perfectly worthy of both Living Wells and Madonna, then I most certainly don’t know what does.