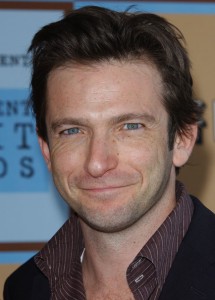 Hollywood is a place known for its lists.  The A-List, the B-List and the best-dressed list are all among the most sought after lists on which to find one’s name if one has designs on making a name for oneself in the city of angels.  However there is only one list that matters to any young, up and coming actor in Hollywood and that is the short list.  The short list is a grouping of the crowned few upstarts, who show the most promise for megastardom and who, as a result of their talent and promise, are among the most sought after actors to work with by leading directors.  One name that consistently makes many of Hollywood’s short lists these days is Dan Futterman.

The very hunky, Mr. Futterman, who plays Vincent Gray on CBS’s Judging Amy, first gained major attention playing Robin Williams’ son in the box office smash The Birdcage and he’s been on a roll ever since.  Last year, Futterman starred in the critically acclaimed Urbania, which preemed at the Sundance Film Festival and generated enough buzz to have a lot of people in Hollywood uttering his name in the same breath as Tinseltown’s eternal leading man, Oscar.  Prior to Urbania, Futterman starred in a series of other films notable among which were: Shooting Fish, The Fisher King and Breathing Room.

And on television who could forget Futterman as Sex and the City’s dreamboat ‘Straight/Gay Guy’ in season two?  I know, I drooled just like you.  (Just for the record though, Dan isn’t a gay man, he just plays one on TV.  Sorry to disappoint, but he’s happily married and expecting his first child at the moment.)  Speaking of picture perfect…

So what’s the next carefully crafted move for a red-hot young actor like Dan Futterman?  Why directing a play about one of the past century’s gayest and most outrageous bon vivant’s of course!  That’s enough to make you scratch your head, huh? Well stop scratching because you’ll only muss your hair.

You read that correctly the first time.  This month, Dan Futterman marks his directorial debut with a take on a morning in the life of Noel Coward with the brilliant production, Private Life.  And what a debut it is!  With a dead on performance from Craig Archibald as Noel Coward and under Futterman’s tight direction, the play moves at a breakneck pace and crackles with wit and verve, which is no small feat for a first-timer faced with capturing one of the greatest wits in history.  After watching the production, one wonders what witty retort Noel Coward, himself, might have come up with about the fact that his life was framed so humorously and so well by a straight man.

Well whatever, Coward would have said about it, Dan Futterman saw no challenges at all for his part.  “I wish I had something interesting to say about my being straight and the challenges of directing a play about a gay man, but I don’t,” Futterman said to me in a recent interview.  “I guess I don’t really see loneliness, or difficulty in connecting, or the compulsion to hide something about oneself, or (on the flip side) tenderness and/or desire between two people as being a gay issue or a straight issue. I feel that I relate to all that both Coward and Darren Zorman, the sailor, (Paul Papadakis) go through on this particular morning that we represent in the play.”

Futterman’s sensibility and sensitivity may have a bit to do with the fact that he comes across as one of those new millennium kind of straight guys who drive gay guys crazy (and straight women even crazier) because they’re just so doggone comfortable in their own skin that they seem capable of genuine sincerity and understanding in the face of almost anything.  In short, Dan Futterman is like one of the good guys, which is evident even in the way he came to direct Private Life.

“I took an acting class with Craig [Archibald] about 8 years ago and we’ve remained friends ever since,” Futterman says plainly when asked how he came to be involved with Private Life.  “He [Craig] had done the play in two different incarnations in New York.  He had a different director in New York and then we both found ourselves here in LA .  I found myself with a little extra money from CBS, so we decided, What the hell!…Let’s rent a theatre and try to do it!”

Well take it from me, they did more than try to do it, they succeeded.  The combination of Archibald and Futterman made for a laughter-filled evening that left me pining for days when men wore smoking jackets, women lunched at “21”, everyone always had a perfect martini at the ready and Noel Coward’s razor sharp tongue was rarely outside of earshot in fashionable circles.

At press time, we couldn’t verify where Private Life might show up next, but if it’s within a hundred miles of wherever you are, make it a point to see it.  Your funny bone deserves it.

And as for Mr. Futterman?  Well, let me just say…

Kudos Dan.  Keep up the good work and we might just make you an honorary member of the club.

Performances to PRIVATE LIFE will play at the Hudson Guild Theatre, 6539
Santa Monica Boulevard in Hollywood. The four-week limited engagement begins
Thursday, January 25, 2001 through Sunday, February 18, 2001.  The playing schedule
is Thursdays through Saturdays at 8:00 p.m. and Sundays at 7:00 p.m. Ticket
prices are $20.00 and can be purchased by calling Tiffany Tickets at
310-289-2999.