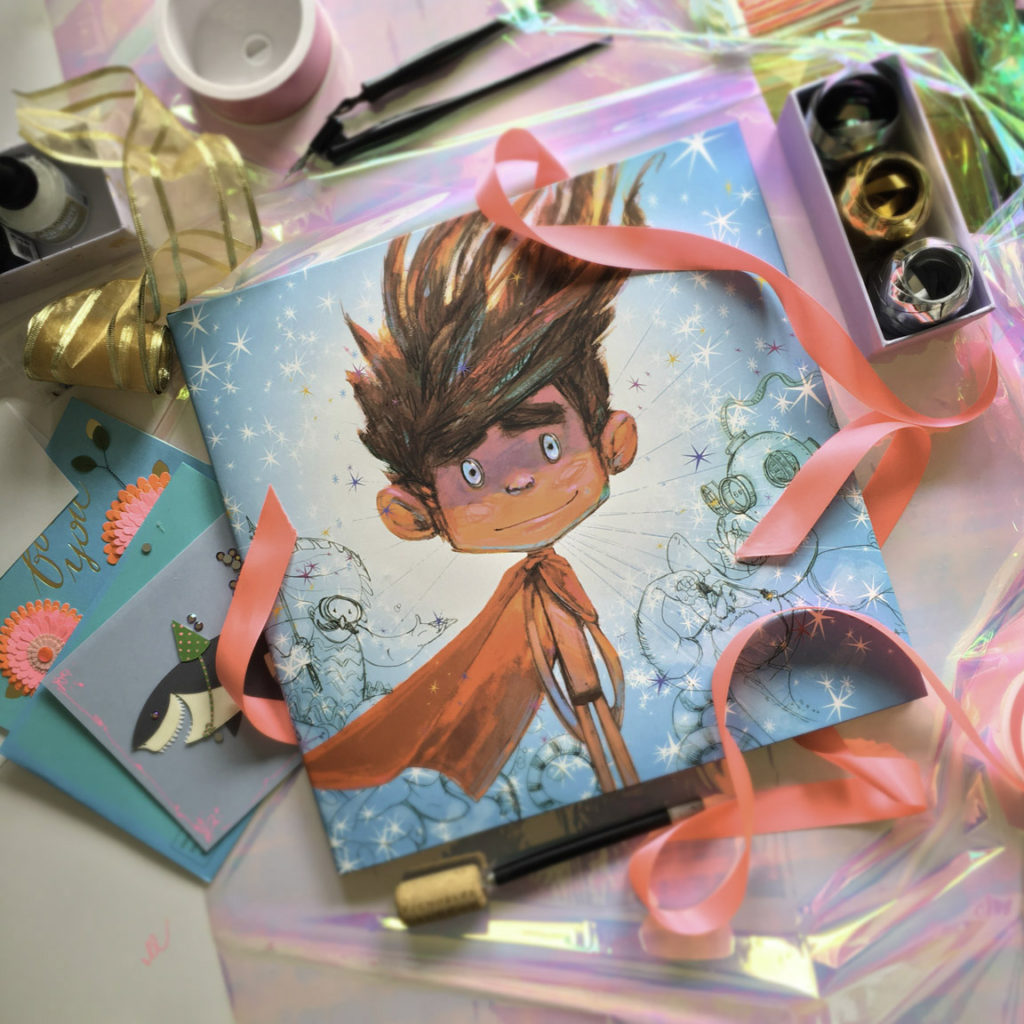 Remember how New York’s The Plaza had Eloise – the hotel’s most notorious, if elusive, resident? Well, allow me to introduce you to Brian Wonders, who could well be a descendent of one of The Plaza’s most eccentric guests. In fact, you might even think of Brian as Eloise’s globetrotting, hipster-in-training great nephew who, like his great aunt, creates his own fantasy world within the confines of the some of the most fabulous destinations around the globe.

The brainchild of Los Angeles- based artist Victor Robert, Brian Wonders is a modern-day “Alex in Wonderland” whose fantastically colorful world of shipwrecks, cabanas, pirates, diving towers and all manner of mischief is beautifully captured in a glossy, bold, eye-popping limited edition story book entitled The Brian Wonders Wordless Storybook.

Each copy  of this exceptional tome arrives signed, stamped, numbered and accompanied by a Magic Magnifying glass that allows the reader to follow Brian’s adventures through the double-gate maze that folds out in the center of the storybook revealing a whimsical journey filled with fantastical seascapes, shiny submarines, glittering swimming pools, birthday party princesses and sheer magic of all varieties.

Oddly however, despite the crisp images that fill its pages, the Brian Wonders story book was not purely born of wild imagination, but also of sheer happenstance. “I loved swimming as a kid but I had really poor eyesight, and since I couldn’t wear glasses in the pool everything was just a big blur,” explains Robert, whose 3D animations skills have also been on display in some of Dreamworks Pictures biggest hits. “Some of the swimming pools were super deep and swimming to the bottom was like entering a dark ocean, ” he continues in explanation of how the snazzy character of Brian came to be.  :And there was one pool that had large circular windows — underwater — half way up the side walls and I always felt I was peering into the belly of a submarine… that’s where Brian Wonders was born.”

On December 7, 2016 LivingWells will present a launch party with Victor Robert in honor of his the new line of  Brian Wonders products. With that date looming near, I sat down with Mr. Robert to dive into the story behind his passion project, his inspiration and his plans for Brian Wonders.

LW:     Who is Brian Wonders and what inspired him?

VR:     Brian Wonders is a little boy of about 7 years old. He is a swimmer. He has an incredible head of hair. He wants a big bright spotlight to be shined on him, but he is also very shy, so he spends a lot time living out glittering fantasies inside his head. You might find him off playacting by himself.  You might catch him spying on you.  He has a powerful imagination but in his case it is a double-edged sword — he will lose control of his imaginary characters and become captive inside his own fantasy.

I was a swimmer as a kid and swam most of my life from elementary school into high school. Swim practice after school every weekday for years upon years…  I think all that time I spent daydreaming underwater, and Brian Wonders came from there.  I was especially small and skinny for my age and felt smaller by comparison when we’d share the pool with the team of seniors. A lot of this shows up in my drawings. 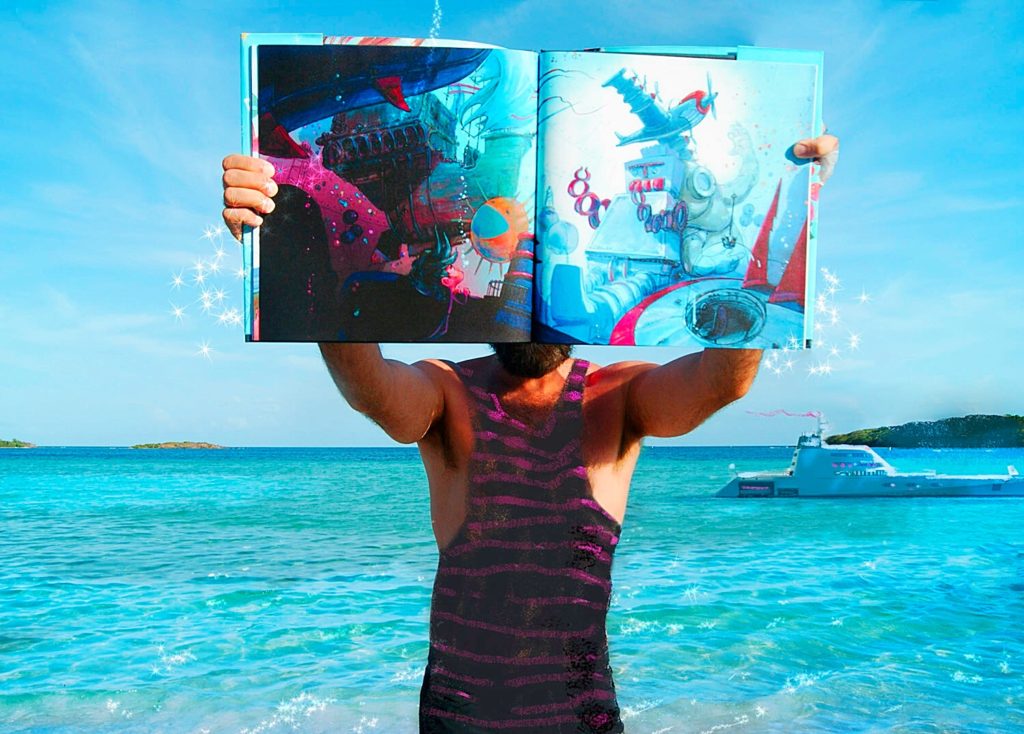 LW:     In the universe of animated characters, what makes Brian Wonders unique?

VR:     [It’s] Hard to put into words what makes Brian Wonders so unique… much of what makes his character unique will reveal itself in later stories… what I can say is there’s a lot me in him, and I don’t see many characters like him represented in the world of mainstream storybooks.

I think that’s another thing that makes Brian Wonders unique is it was created outside of the mainstream world of storybooks. I’m printing these on my own in very limited quantities, and I had fun including additional flourishes — for example, the magic magnifying glass that comes included with each storybook, the large format of the storybook 12” square and the custom made slipcover, adding a double-gate fold out at the center of the book, the fact that there are no words in the storybook. I look at Brian Wonders as the storybook that I wish existed when I was a kid — or my fantasy of what a storybook should be.

LW:     Let’s talk about the book …tell me about the thought process that went into it and the construction of the book itself?

VR:     The drawings were sketched in pencil and then scanned.  In the computer I added basic colors to figure out the lighting and composition and to experiment with size relationships. This image gets printed out, mounted on wood and I begin the painting process. I used mainly acrylics and guache. This raw painting gets scanned back into the computer and adjusted for print.

There’s a wide variety of techniques in the book — some of the illustrations were put together by overlaying layers of 3D CGI elements and then working those layers into the painting. Some spreads are technically very traditional — graphite lines with washes of color.

The over-sized dimensions of our book required we bring our project to a shop equipped with a large scale digital printer. We found one in Minnesota and they were incredible to work with. 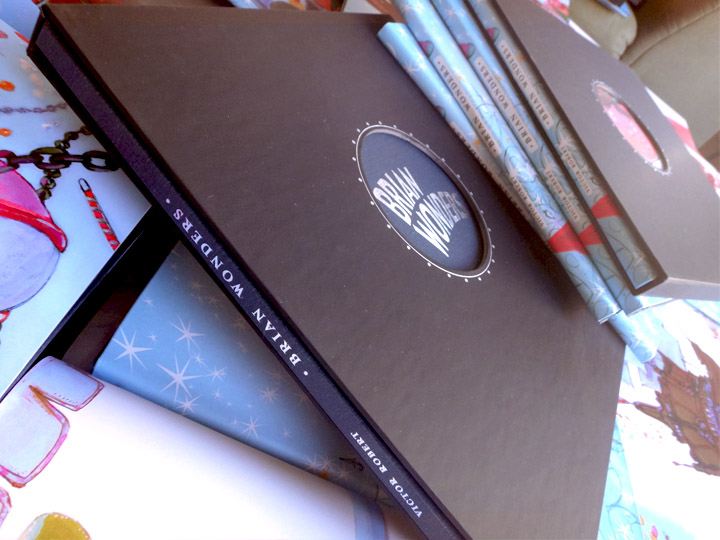 LW:     Who do you see as the ideal audience for the Brian Wonders story book?

VR:     Because of the limited nature of this First Edition, I think anyone looking to give a unique creative gift is the ideal audience. In addition, creative parents, artists and storytellers of every age. Teachers. Collectors of illustrated books. And if you were or if you know of a little Brian Wonders, this book is for them.

LR:      How was your love of animation and drawing born?

VR:     Definitely Disney’s Alice in Wonderland made some strange new connections in my brain the first time I saw it. I must’ve been in kindergarten or 1st grade…all us kids we would sit on the carpet in the music room…the teachers would roll out a rectangular tower entertainment system…this was the early 80s… with a giant television on top and a giant VCR hooked up to it… large dumb knobs and dials and buttons and little orange lights… and they popped in Alice in Wonderland and I was dazzled with the colorful palette and the darkness of it. It was a little scary for me [but] I related to Alice in a way that other boys didn’t [and] in a way I think I fell in love with her.

My love for drawing I think came from there. I remember drawing all over the inside covers of books and creating little flipbooks out of the corners of volumes of required reading.

VR:     Well there’s a lot that’s next. I’ve been working on Brian Wonders a while but I think it’s really just at the very start. His next storybook will be told through the perspective of Stella, the girl with blond swirls of hair in the story  and I’m excited to show her personality. As a 3D animator, I can’t resist the temptation to want to pull the characters into the computer and see them animated. I’m already working on 3D models of Brian and Luna. I need to see the characters animated, I think it’s really important for the world to see him ‘alive’, breathing and speaking and reacting so they ‘get’ who he is.

From a brand standpoint, the Brian Wonders world will begin releasing limited edition gifts including designer toys and a collection of designer home accessories featuring art from the storybooks. 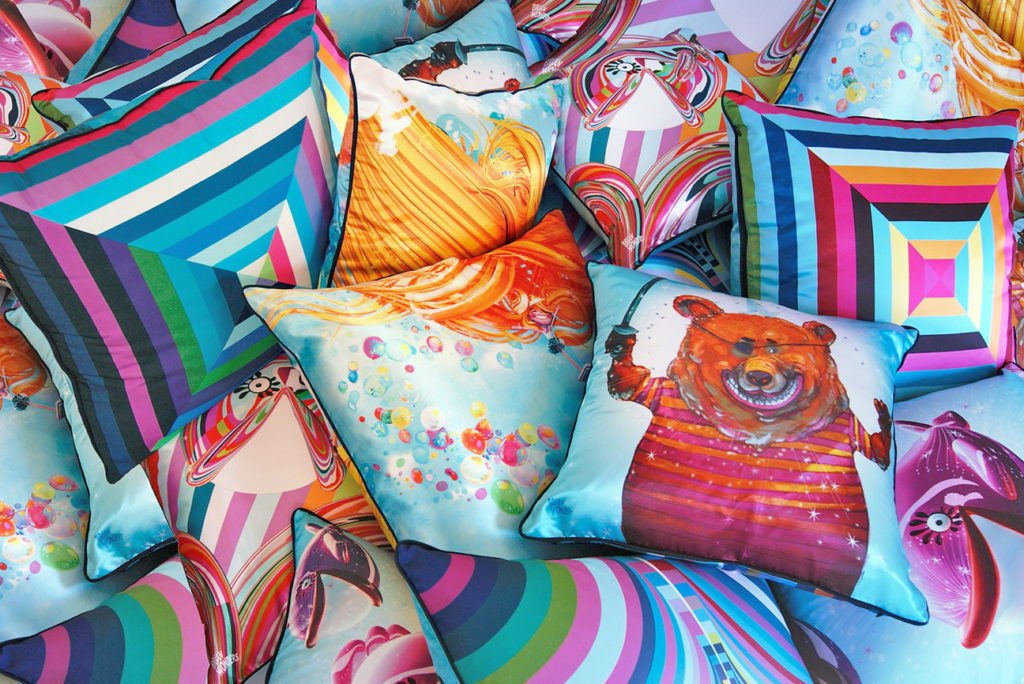 LW:     Final question, do you have a favorite character outside of Brian?

VR:     Aside from Brian I love the character of Luna. Luna is Brian’s inflatable pool animal. She’s got red ears a big blue smile and is covered in colorful polka dots and Brian rides her like you’d ride mounted on a horse. Luna is magical but in the way the Cheshire Cat is magical — back to Alice in Wonderland.  There’s a bit of darkness behind her color… something mischievous… she craves risky adventure… she’s his alter ego.  She will whisper things in Brian’s ear, the same things he’s thinking. And once she’s convinced him, he will climb aboard and they will take off together like a speedboat.

And so the adventure begins.

To purchase The Brian Wonders Storybook or to find out more information about other Brian Wonders products, visit brianwonders.com.

Also join LivingWells next week at Please Do Not Enter in Downtown Los Angeles to celebrate the launch of the Brian Wonders collection of designer home accessories. For more details, click here or seee below.