Speak to Catalina Guirado-Cheadle for any length of time and you’ll soon come to realize that there is not much ground she hasn’t covered in her 20-plus year career. The only daughter of celebrated Spanish artist Juan Antonio Guirado, Catalina has lived in the glamorous world of the gypset (gypsy + jetset) since childhood and embraced it to the full with age.

A quick recount of her recent life is almost staggering. She has been a successful runway and print model, gracing major magazine covers and designer catwalks alike. She’s hosted and appeared on a string of successful television programs in the UK. She’s written songs with and for huge 80’s Brit acts ranging from Echo and the Bunnymen, Henry Priestman and The Yachts to the Christians, Guy Batson, St. Etienne and Blondie (and scored a chart-topping hit or two in the process, thank you very much). She’s even been signed to recording deal of her own with none other than Universal Music. Along the way, she has dazzled on countless red carpets, bewitched paparazzi and dated some of the most notable film and music stars of the last two decades before settling down into wedded bliss with her rocker husband, Matthew Cheadle former guitarist of chart topping US rock group i-94.

Today, perhaps more than ever before, Guirado-Cheadle is a doggedly determined woman focused on a career that is clearly on the ascent. Following the death of her father in 2010, Catalina was made the sole director of the acclaimed artist’s estate, which she has rebranded as The Guirado Estate and on behalf of which she works feverishly in order to promote and preserve her father’s legacy. Simultaneously, to complement her work with the Estate, the ever industrious Guirado-Cheadle launched Guirado Design with collection of luxury silk scarves, fabrics and bespoke wallpapers inspired by select enlightening works of art by her father. Needless to say, Catalina Guirado-Cheadle is a very busy lady. So I was thrilled to find an excuse to sit down with my great gal pal so that I might catalogue her thoughts for you on everything from the essence of glamour to body image and the fashion industry. Here’s what she had to say:

TheDuaneWells:    When did you first recognize the importance of style?

Catalina Guirado-Cheadle:      When I was about 11. My mum was a seamstress and we used to [visit] some fabulous homes of my mum’s clients.

TDW:  Who was your first style icon?

CGC: Without realizing it at the time, I guess it was my godmother, Marilyn. She was – and still is – super glamorous and subscribed to VOGUE, copies of which were given to me every 2 months. She would buy me Gucci and Prada accessories such as a belt or handbag every Christmas.

She also had the most fabulous homes for which my mum did the furnishings and she loved decorating them herself so we used to go and help. When I was 14, she actually introduced me to the beauty editor of British VOGUE, who was her friend, and that’s how I became a model.

TDW:  Speaking of your start, since you first burst onto the scene, you’ve been a model, television personality, celebutante and now serve as executive director of your foundation. Having lived so many lives, which do you feel best suits you?

CGC: I think the reason I transitioned into [my current role] so easily is because I have done so many different things over the years that are a natural progression within their field. Model turned TV host/actress, turned singer songwriter, turned music A&R, turned music TV executive, turned art and music PR and now President of The Guirado Estate and Creative director and designer for my Guirado Legacy design collection. I am still all of the above but I’m just choosing the hats I wear at the moment for the job title and switching them when necessary. I’m just much more mature and business-like nowadays –and, dare I say it, responsible!

TDW:  What has been your most memorable photo shoot?

CGC: The one that really sticks out was my Maxim magazine cover and spread back in 2002 shot by top photographer Willy Camden. It was when magazines like Maxim and FHM were creditable and really well produced. It was a full-on production shoot at Pinewood studios (where they shoot Star Wars and 007) and I spent the day under a rain machine crawling around a water tank in lingerie. They then photo shopped me into rainy shots of the streets of London’s SoHo. It looked amazing even though I felt like a drowned rat most of the day. 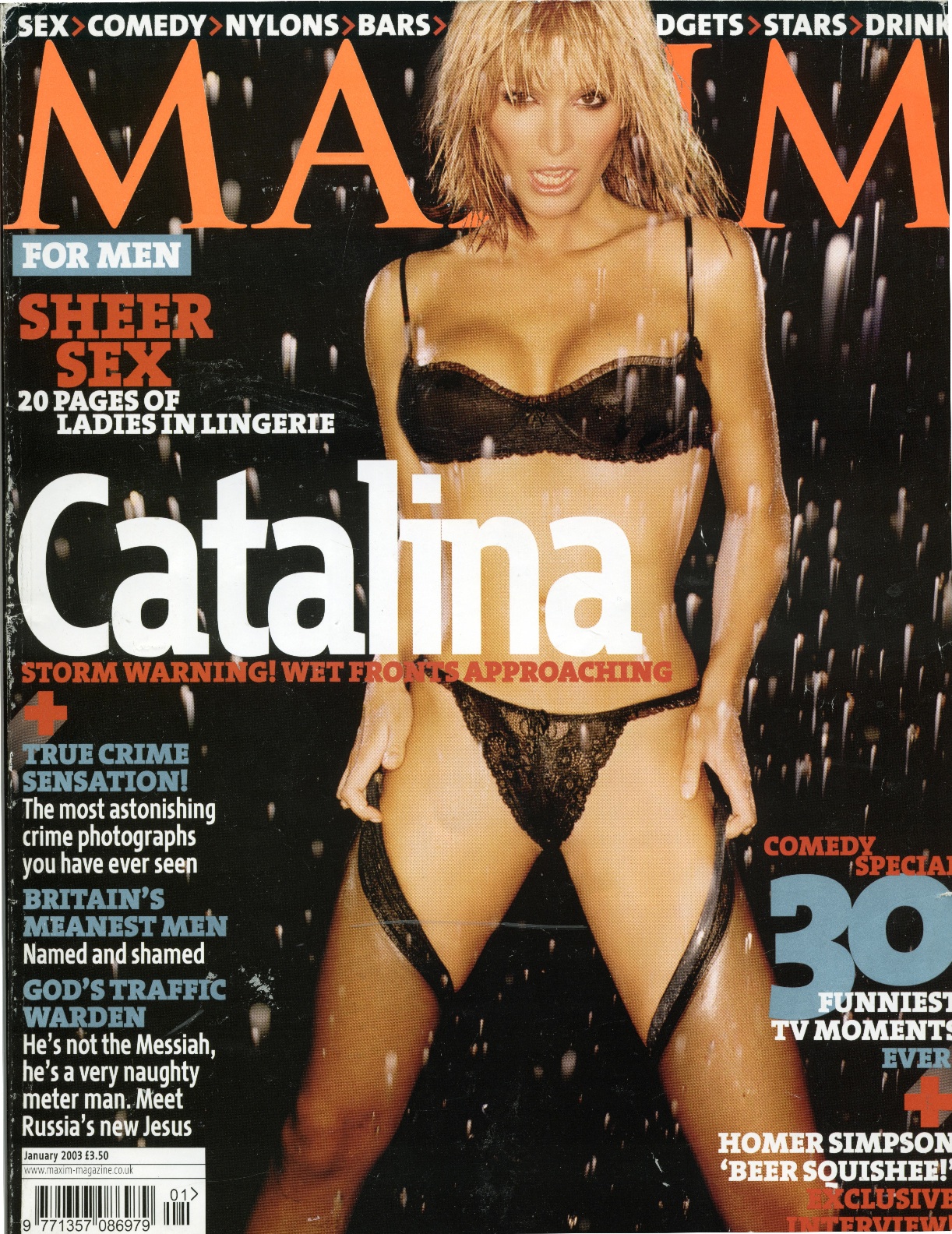 TDW: What conversations have you had to have with yourself about your body over the course of your career?

CGC: Well sadly when I was a fashion model in Europe I was usually telling myself not to eat as I had to be really thin. I would make agreements with myself that If I ate a bar of chocolate I wouldn’t eat the next day. It was so unhealthy and I really blame the model agencies for creating girls that have so many eating disorders and complexes. Being told at 15 with a 23 ½ inch waist that you need to lose more weight isn’t exactly healthy and that was back in the 90s when size 4-6 was the normal model size! I had exactly the same measurements as Cindy Crawford!

Now that I’ve hit 40, I tell myself it’s okay and necessary to be a size larger as your body changes. It’s natural and a 40-year-old shouldn’t compete with a 20-year-old. Plus, I think there is nothing more unattractive than a bony older woman. Eating healthily and working out to be fit, NOT skinny is the goal, which is why I do Pilates as it’s so great for the core and body strength without creating too much muscle. I want to emulate Sophia Loren and Raquel Welch as I grow older!

TDW:  What are the essential elements of great style?

CGC: Well style isn’t something that can be bought for a start! Great accessories help of course but style comes down to interesting influences as well as a fun sense of humor, attitude and life.

I think that staying true to your own taste and personal style is so important [because] people who follow fashion seasons rigidly have no sense of their own identity in life. Mixing vintage, high street with designer labels is the most stylish look in my mind.

TDW:  What is the best piece of style advice you’ve ever received?

CGC: Accessory-wise, take off the last thing you put on! And always check your body from the back. I have a low rib cage and square hips so I have to be careful not to look bigger than I am. Also [I was told] not to wear black on the red carpet as the picture desks don’t usually pick the photos for their spreads.

TDW:  Conversely, what is the best piece of style advice you’ve ever given?

CGC: Take the last thing on, off! And, people over 40 really should not wear daisy dukes or mini mini-skirts! I don’t care how good your legs are — it’s a no!

TDW:  What are your thoughts about color? Prints?

CGC: I love wearing red dresses! It brings Instant attention at a party and on the red carpet. I’m really into color in the summer but in the winter all I seem to wear is black with a colorful scarf accessory (usually one of my own designs).

CGC: Wearing all designer labels at once and not following their body type but just wearing something they think is cool [though it] should [only be worn by] a 16-year-old stick insect in reality!

TDW:  Is there a universal style weapon (secret) that works for every woman?

CGC: I was brought up in Europe and we are taught that it’s all about having great classic accessories and what’s more classic than a great haircut and blow dry? [With] clean hair, clean nails, good skin, natural make up, quality shoes and [a good] handbag, you can go out in jeans and a tank and still look good.

TDW:  What is your favorite fashion accessory?

CGC: My collection of sunglasses…mainly vintage.

TDW:  What has been your worst style moment?

CGC: The 80s. I hate everything about the horrible make up and horrendous hair. I copied looks straight out of magazines and looked like a glow worm most of the time. Luckily that’s when I discovered Camden Lock in London and my love of vintage 60s clothes started. I was slightly goth too for a while. I shot a Vidal Sassoon commercial and they dyed my hair black and cut short bangs. It was very fashion forward but not great when you are 16 and still at school. I pretended I was in the band Shakespeare Sister and dressed in Katherine Hamnet and dated a rock star all before I left school! No wonder the girls at school were so mean to me. I was so ahead of my [years]!

TDW:  What part or your body or physical attribute have you had to learn to love?

CGC: My face isn’t even and I have slightly different shaped eyes, but so does Christy Turlington so I’m okay with it. [Laughs]

I try not to look at any part of my body for too long as it doesn’t end well. Fixation is most of the problem with today’s obsession with plastic surgery.  I know I’m guilty of thinking I look fat or am sagging when in fact I look the same as before but didn’t obsess. I truly blame Los Angeles, social networking and the selfie. It’s getting scary and its not real. I leave LA and I feel fantastic about myself!

TDW:   If you could bring one fashion item or look roaring back to favor what would it be?

CGC: I’m really happy with exactly now and the revival of 60s/70s boho and disco chic. I’m in retro heaven.

To find out more about the Guirado Estate, click here. Follow the latest with Guirado design at:  www.guiradodesign.com.