I have been trekking to London ever since I was a wide-eyed 18-year-old college student who had seen little of the world beyond America’s borders during what might have been called my “formative years.” In fact, though London was the second European capital city I visited on my very first overseas tour, it was the first to win my heart in what has been an enduring love affair that has lasted longer than I dare mention for fear of offending some of my more sensitive real-life exes.

However, in all the years I had been visiting London, it was not until after it was announced that London would host the 2012 Olympic Games that East London ever showed up in earnest on my radar (that is, of course, beyond my knowledge of British television shows like The East Enders and accounts from friends about the scrappy, scruffy nature of the then-rough-and-tumble section of London). Prior to that time, my London stomping grounds had been limited to the likes of Knightsbridge, Soho, Hampstead Heath, Notting Hill, Mayfair and Trafalgar Square, among other well-tread haunts.

But then something happened around 2007. There was suddenly an energy that drew me out of my London comfort zone. Around that time I discovered glimmers of fabulousness that made the voyage to Canary Wharf, Bethnal Green and Shoreditch worth the trip. Subsequently I ventured to Brick Lane, which became a regular stop on my visits, and later to Greenwich.

Finally, I came full circle when I set upon the new and improved East London just a few weeks ago and felt the full weight of the renaissance the area had witnessed. What was once something of a ‘no man’s land’ had been transformed into one of London’s trendiest, coolest neighborhoods in large part thanks to the Olympic Village that was now its centerpiece. The streets, crowded with hipsters, were lined with edgy new shops, galleries, bars and restaurants. I wouldn’t exactly call East London shiny and new, but I would say it is without question gritty, urban, young and possessed of a definitive and magnetic personality all its own. And, after all, is that not the very essence of cool?

One of the favorite new spots I unearthed during my discovery of East London 2012 included the swank bistroLes Trois Garcons, a converted Victorian Pub in Shoreditch that is now awash in a whimsical, eye-popping medley of crystal chandeliers and taxidermy. From the decidedly French menu, I sampled the Escargot de Dorset, Homard Ecossais (Scottish Lobster served with Lobster Butter Sauce), Côte de Veau et Ris de Veau aux Asperge (Veal Cutlet served with Sweetbread Wontons and Asparagus) and Tarte Tatin aux Pêches (Peach Tart Tartin). Classically French and utterly elegant, the combination of the service, the ambiance and the food at Les Trois Garcons only reconfirmed what I already knew—East London had entered the big leagues, more than able to compete with the London’s heretofore most-buzzed-about neighborhoods.

Steps away from the restaurant, I ventured into a cult gay pub, The George and Dragon, where the party was in full swing on a Friday night. Packed to the gills with sweaty, sexy alternative types grooving to one dance classic after another, it was immediately clear that I was no longer in Soho but in a parallel community that thumbed its nose ever so slightly at the established gay centers in London.

Jacket off, hands raised, I think I actually might have danced liked nobody was watching until the sheer heat in the place forced me on to my next and final stop, the cult gay pub The Joiners Arms. In this larger yet similarly intimate space, resident DJs spin the crowded dancefloor into a frenzy each week while more low-key patrons mingle on the packed smoke-filled back patio. Another winner, the mazelike bar/club delivered the fun with a uniquely funky East London spin. 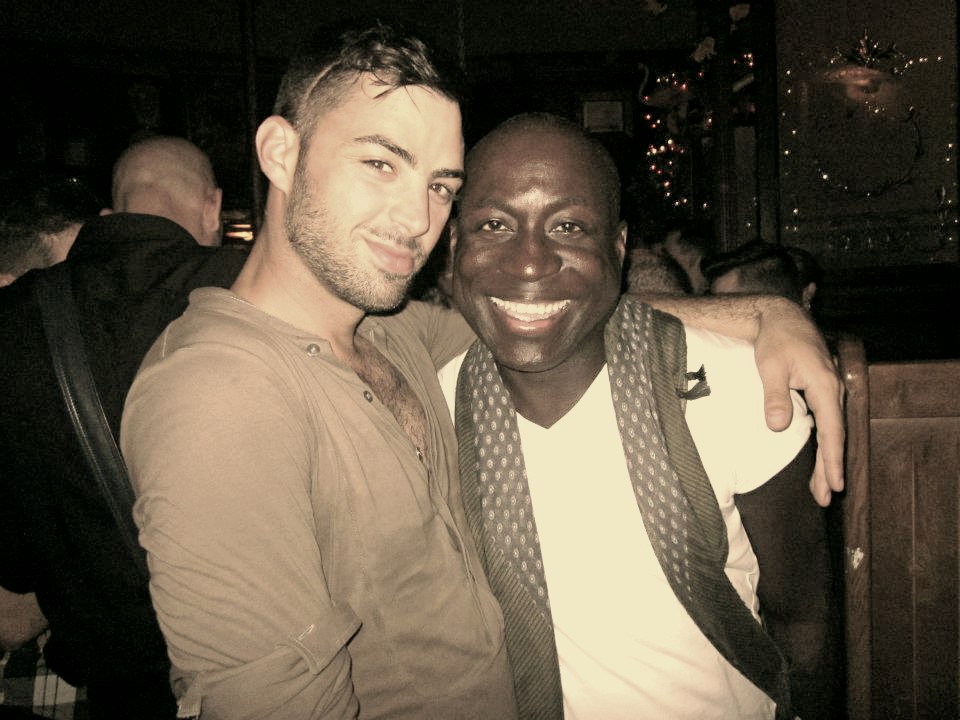 Riding home at just around 2 a.m. (admittedly early), I contemplated just how much not only East London but London in general had changed since my first trip all those years ago and I felt reminded of why my love affair with the city has remained so passionate despite the passage of time. Like a great lover, London has evolved as I have evolved, and after more than a decade and a half, it just keeps giving me more reasons to love it. Now that’s my kind of romance.

Until next time, cheers!