It started off as a bad day. In fact, it started it off as a very bad day that I didn’t imagine could possibly end up involving Justin Bieber.

A week of calamities including a car accident and the end of a long-distance romantic liaison culminated in my arrival at LAX International Airport in a rented Toyota Yaris just in time for a noon flight to Phoenix. I was actually en route to Sedona for what I hoped would be a relaxing spa weekend at L’Auberge de Sedona, but to say that the kickoff to my journey was a trifle bumpy would be a bit of an understatement.

So after spending nearly three hours in the airport post my scheduled departure time (which is, for the record, about three times the length of the flight to Phoenix) and being lectured about the beauty of Sedona by a bubbly flight attendant with an unnaturally immobile smile, I was given two $6 meal vouchers along with a $50 flight voucher and told by the airline that they could put me up in an airport hotel near my house overnight and get me on a morning flight to Arizona via Salt Lake City that would finally park me in Phoenix a full 24 hours after my originally scheduled arrival time. Now, I could be snarky here and mention the airline but I won’t be, because the truth is that even good airlines have bad days. So I’ll just say that this was not the friendliest day for the airline in question and leave it at that. However, as I sat there seething while mulling my options, it was clear that what was meant to be a long, relaxing weekend was rapidly deteriorating into a short, stressful one. But in an extraordinary tale of a negative situation giving birth to something positive, the day took the most unexpected and unusual turn.

Clearly I was not the only one left in the lurch by the airline’s cancellation. There was also my colleague and a line of other passengers for whom a night at LAX was not a premium option.

One of those passengers, however did an amazing thing when, after exhausting all of his options for getting to Arizona that afternoon, he booked a private jet and offered to give six random folks from the cancelled flight a lift to the Grand Canyon State. That passenger turned out to be music mogul Scooter Braun, manager of Justin Bieber, Carly Rae Jepsen and The Wanted.

In a world, where people rev up the engines in their cars when you need to change lanes on the freeway and never bother to say ‘thank you’ when you hold a door open for them, it was a grand and generous gesture. However, in a city like Los Angeles where larger than life egos, surly bouncers and velvet ropes are on display in abundance, it was a miraculous gesture…and one that to be honest I was completely skeptical of at first. Initially, I thought to myself, who is this guy and why is he being so generous? But the fact that Scooter Braun is in fact a salt-of-the-earth, class act was reinforced when he invoked his mother’s name in his assurances that he had every intention of doing exactly what he had offered. In my experience that is always a sign of sincerity.

Besides, having no better option for getting to Arizona before the next day, I went with the offer and as a result had an experience that reminded me of the spirit of giving and how sharing whatever one has can have a profound ripple effect on the lives of the people we touch. In Scooter’s offer, there was no catch and nothing crazier than a good Samaritan picking up a few strangers whose car had broken down on the side of the road. Only in this case it was a plane and not a car that was broken down.

My colleague and I were traveling for work as were some of the other passengers on that jet that day, but others were traveling to celebrate hallmark birthdays and say goodbye to loved ones. But for the kindness of one person wanting to ‘pay it forward’, not only would I have missed out on my much needed weekend of relaxation, my fellow travel companions would have missed the special, irreplaceable moments around which their entire trips had been built. The fact that they were now going to have those experiences probably touched me most of all because in my mind the joy of living well lies in the power to give back or extend a helping hand – something that Scooter Braun did with understated grace…no quid pro quo required or requested. 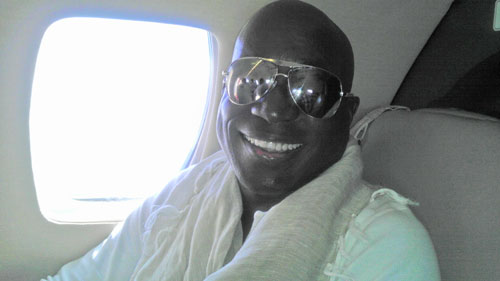 Within an hour of our flight being cancelled, a shuttle from Atlantic Aviation had whisked us all over from the main terminals at LAX to their perfectly comfortable and infinitely more peaceful private terminal just minutes away. And in less than 45 minutes or so, a jet was fueled and ready to take us to Arizona. The pilot came and took our luggage, loaded up the jet and then we all made our way down the runway and onto the plane. And off we went with minimal interruption in our travel plans.

As I settled into my seat after takeoff, I looked around at my motley crew of travel companions and marveled at just how dramatically things can change in a matter of hours. More importantly, I thought about the power of human kindness and the fact that little miracles really do happen every day — even at LAX.