I just touched down back in Los Angeles early last week after a whirlwind weekend in Colorado, where I attended the third installment of the Beaver Creek Food and Wine event, which annually draws scores of food and wine aficionados from around the country, along with a more than a fair amount of celebrity chefs.

Shortly after checking in at the Park Hyatt, I made a quick change and then took a dash around the property and the heated sidewalks of Beaver Creek, where I was greeted by live entertainment in the lobby (Antler Hall, as it is called), warm chocolate chip cookies and the aroma of S’mores being freshly made with Lindt chocolate and marshmallows of all varieties. (In fact, I saw a lavender-flavored marshmallow that looked rather intriguing.) I also noted the Veuve Clicquot tent at the bottom of the mountain as well. But, as delightful as it seemed outside, I decided that I would rather enjoy my champers inside in the warmth of the Hyatt’s 8100 Mountainside Bar and Grill with a colleague. One glass of Veuve Clicquot Rosé down and it was time to be off to the weekend’s kick-off event, a Meet the Chefs Reception at the Black Diamond Bistro in the Charter Hotel.

More Veuve followed at the reception as guests sampled a variety of Colorado hors d’oeuvres prepared by Beaver Creek’s host chefs. Topping my list of favorites was a deliciously hearty lamb stew (very Colorado), Hot Smoked Char, Foie Gras-Stuffed Twinkies, Colorado Striped Bass Carpaccio and Buffalo Tartar in Wonton Cups. As the nibbles wafted out of the kitchen on trays attached to waiters all dressed in black and wine from a battalion of winemaker sponsor, I had a chance to have a quick chat with Top Chef Season 2 finalist Chef Sam Talbot and Chef Alex Seidel, one of Food and Wine magazine’s Best New Chefs of 2010. 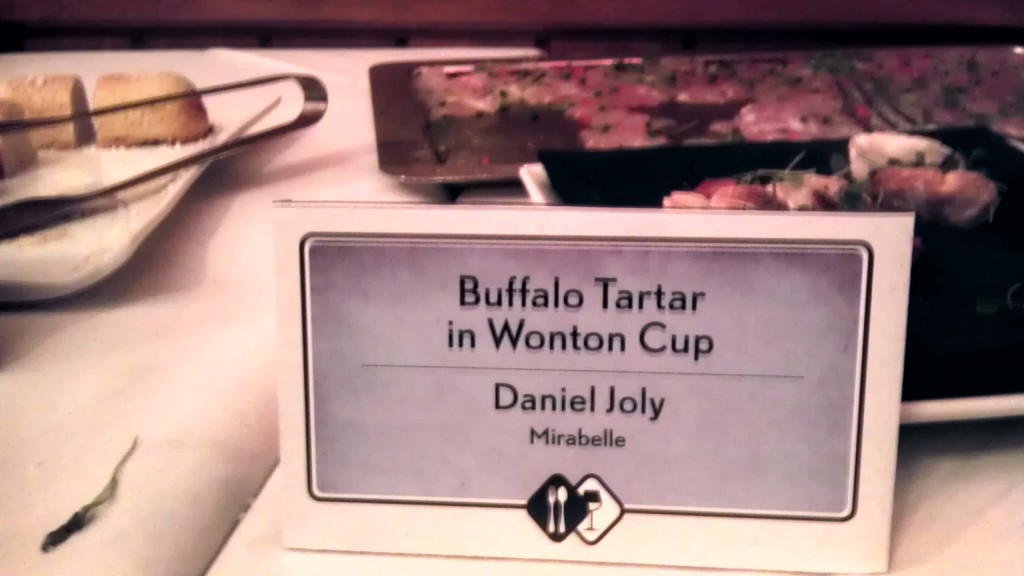 In between chatter about farms and such, I learned that Talbot is opening a new restaurant in Montauk soon. No name yet for Talbot’s latest venture, but expect it to be a small and intimate eatery where the food will be the star and the scene much more mellow than his previous endeavors at Imperial No. 9 at the Mondrian in NYC and Surf Lodge, which was also located in Montauk. As for Seidel, his Fruition restaurant continues to be a major hit in Denver, as does his 10-acre farm, which supplies not just his own restaurants but dozens of others in Colorado. A big ‘hoorah’ for the farm-to-table movement.

On day two, as Food and Wine‘s Gail Simmons hosted a cooking demonstration, I hit the slopes for a ski lesson, which is terribly convenient at Beaver Creek, because the slopes and gondolas are literally at the doorstep of the Park Hyatt. Hours later, I popped into the cozy Golden Eagle Inn Restaurant in the Village for a steaming bowl of Elk Chili before heading off to the Aprés Ski Beer and Burgers event where Top Chef Season 4 contestant and GoodStuffEaterymastermind Spike Mendelsohn, along with his crew, turned out a Wild Boar Burger that explained with each flavorful bite why the Obamas are such a fan of his Washington, D.C., burger joint.

Right next door, Ft. Worth’s Chef Tim Love of the Love Shack left tongues wagging with his skirt burger topped with lamb bacon and dressed with roasted red pepper hollandaise. Meanwhile, Stella Artois, Hooegaarden and Leffe were on tap to wash down the burgers, a band played and the chefs mingled. A lovely casual afternoon was enjoyed by all.

Later that evening, there was a fundraising dinner for the Bright Future Foundation at Splendido Restaurant, where Chefs Sam Talbot and David Walford took the reins in the kitchen as the winemakers behind Layer Cake and Cherry Pie poured the wines. While Walford delivered a Parsley Root Soup with just-smoked trout, guanciale, leeks and fried bread that started the meal off on a high note, Chef Sam Talbot brought the whole menu home with a rich pairing of Braised Clams and an 18-hour Pork Shoulder, served with white beans, white sesame and pink grapefruit caviar. It was spectacular, as were the wines paired with each course. I sat with the winemakers that night and was blown away by their product. Word to the wise—If you haven’t tried the Hundred Acre 2007 “Ancient Way” Shiraz or the If You See Kay 2010 Rosso, then you’re in for a real treat. I would categorize both as “highly recommended.” You read it here, maybe not first but most certainly with emphasis.
On the final full day of Food & Wine weekend, I attended a “Ski.Eat.Ski.” luncheon with the amiable John Besh, a James Beard award-winning chef who was named one of Food and Wine magazine’s top new chefs early on his career and whose flagship restaurant August was featured on the late great Gourmet magazine’s “Guide to America’s Best Restaurants” and “America’s Top 50 Restaurants.”  As Besh meandered around from table to table talking and laughing with guests at the luncheon, a silky Cauliflower and Lobster Bisque with shaved white truffle was served as the first course. That course was followed by a Chestnut Cavatelli with a ragout of elk shoulder and wild mushrooms that had just the right kind of warmth and robustness that a day of skiing requires. The meal closed with a Warm Gateau Basque that cemented Chef Besh’s reputation as one of the most visionary chefs working in the Southeast and indeed in America.

Later that evening, after a quick steam and soak at the Park Hyatt’s massive, 30,000-square-footAllegria Spa, it was time for the premiere event of the weekend—The Grand Tasting, where all of the chefs put out brilliant bites for the capacity crowd as a live band played jazz and R&B classics. Again, Chef Tim Love was a standout with a layered Smoked Lamb Posole Stew possessed of that rare quality that makes each bite better than the last. Another standout was Chef Daniel Joly of Mirabelle Restaurant with a cheesy, gooey Lamb Bacon Tarte “Sifflette” that was just perfectly decadent. Ditto for Chef Alex Seidel with a tender Braised Short Rib and Chef David Gutowski of Grouse Mountain Grille, who prepared a deconstructed Bologna Sandwich with housemade bologna, rye bread and ramp slaw that added more depth than you can imagine to a familiar favorite. Alongside the bites, Beluga Vodka, Capture Wines, Schweiger Vineyards, Veuve Clicquot and The Hess Collection poured as the band played on and on into the night.

On the final day of the weekend—”Sunday Funday” as it was called—the celebrity chefs and Beaver Creek favorites competed in a downhill ski race to raise money for their favorite charities. Four spots were allotted to each chef’s team, and each was auctioned off to the highest bidder. Following the race, the winner was announced at a Champagne Brunch at Beaver Creek Chophouse, where good-byes were said over bottomless mimosas, omelets stuffed with prime rib and cheese, steak and egg wraps, pancakes fruit, pastries and all sorts of other delicious breakfast treats. It was a fitting end to a weekend that had lived up to its purpose of showcasing Beaver Creek as a true food and wine destination. Bravo, Food and Wine. Bravo Beaver Creek!

For more information about Beaver Creek, go to beavercreek.com.