By any standard, the fictional Savastano clan central to the Weinstein Televison Company-distributed hit Sky Italia series, Gomorrah, is not one to be trifled with. For those who come into contact with the Savastanos, and indeed even for those who count themselves among its ranks, life is a tenuous affair subject to be taken on account of suspicion, manipulation, internal power struggles or just plain old-fashioned grievance, however slight or based in reality.

In Naples, which serves as the often gritty, occasionally picturesque backdrop for the crime-fueled drama in the series, the Savastanos are portrayed as the top dogs in the infamously violent real-life Neapolitan crime organization known as The Camorra, and they neither take their power lightly or endeavor to leave a diminutive footprint on the community that surrounds them. They are the law and they own the law. And every episode is an adrenaline-filled, bullet riddled excursion into the underbelly of some of the most notorious ghettos in Naples, the drug trade that pervades those communities and the mafia dons who do battle for sovereignty over them.

Not since the first season debut of Downton Abbey, have I found myself more riveted by the lives and doings of a television family. A curious comparison, you say? Perhaps. And yet, while on the surface, it may seem odd to compare the stately Granthams of Downton to the violent Savastanos of Naples, at the core of both shows, the similarities are plain.

You see, just as the Earl of Grantham dictates life in Downton, so does Pietro Savastano dictate life in Naples. Similarly, just as Lord Grantham hails the grand Downton Abbey as his seat of power, so does the commander of the fiercest Neapolitan crime family lord over his dominion from a heavily guarded, heavily fortified palatial palazzo in the suburbs of Naples.

Likewise, just as Lord Grantham relies on the quiet strength of Lady Grantham to take on great challenges of the day, so does Pietro Savastano lean on the steely reserve of his wife, Immacolata Savastano, to support his dark and controlling ambitions. Finally, and perhaps most significantly, just as the Earl fights to maintain and uphold the social order he inherited, so does Don Pietro struggle to maintain his supremacy within the ranks of an ever changing and ever more violent Naples filled with upstarts angling for his throne.

I could go on, but you get the gist. 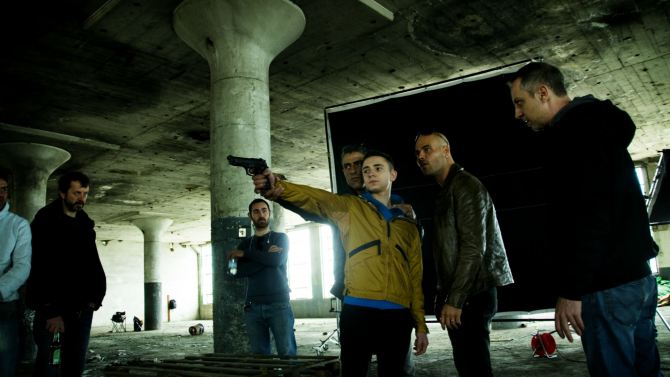 Based on the chilling best-selling book of the same name by Italian journalist and novelist, Robert Saviano, Gomorrah, has already broken records in Italy, becoming not only the most-watched current television program in Italy, but the most watched show in the country’s history. Beyond that, the show has become a global hit distributed to more than 130 markets.

America, however, has been slower to take a cotton to the series.

Since Gomorrah debuted in the U.S. on Sundance TV last fall to generally strong critical buzz, the show has not quite grabbed the imagination of the American public, which is why I feel duly obligated to recommend it.

Intense, addictive, beautifully shot and set to a stirring soundtrack by Mokadelic, Gomorrah is ideal viewing for either your next long-haul flight or your next major television binge. (And that may be the only redemption for which the show’s universally irredeemable characters can hope).

Season 1 of Gomorrah is currently available on Netflix and Amazon Prime. Season 2 of the series debuts April 26, 2017 on Sundance TV.

Watch the trailer for season 1 below: