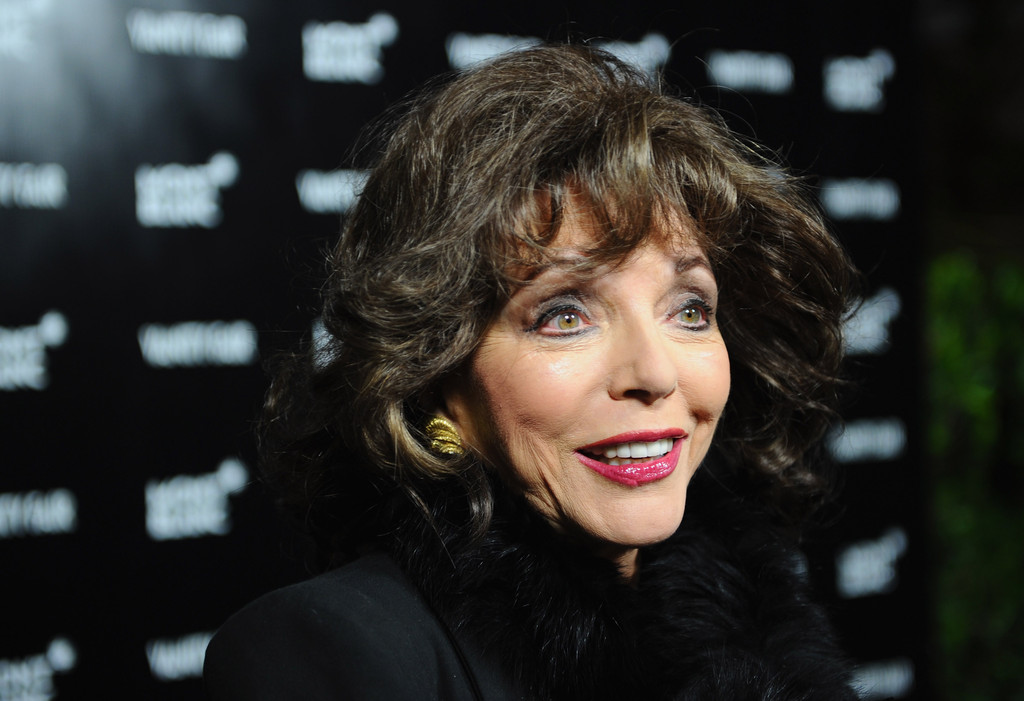 Actress, author, and television icon Joan Collins, has never been a shrinking violet. And after over 50 years in show business she apparently has no intention of becoming one.

Whether playing sex kittens, historical heroines, or the villainous ex-wife of a certain Denver-based oil baron, Joan Collins has developed a reputation in Hollywood for portraying  brassy characters who refuse to fade into the background. Despite the string of roles that bear her saucy imprimatur, it is perhaps her iconic turn as vengeful, tough-as-nails Alexis Carrington Colby on the ’80s television phenomenon Dynasty for which she is best known. And now, just like those strong-willed, irrepressible characters, Collins will once again take center stage and boldly draw back the curtain on both her career and storied personal life in An Evening With Joan Collins, which makes its West Coast debut on Friday, October 16, at the Carpenter Performing Arts Center in Long Beach, Calif. It is the first of what Collins hopes will be many nights on this side of the pond for her one-woman show, which has already toured the United Kingdom to rave reviews.

Filled with anecdotes, photos, and video clips that trace the path of her eventful life, An Evening With Joan Collins promises audiences an irreverent firsthand trip down the memory lane of Collin’s roller-coaster past — from her early pinup model days to working with some of the biggest names in Hollywood. Collins promises to hold back very few of the dishiest moments from her whirlwind, multifaceted show business journey, which began before she even hit puberty.

“I first appeared on the stage when I was 9 years old. In fact, I missed my cue and was soundly told off by the director,” Collins recalls with a laugh.

Despite that somewhat inauspicious beginning to her career, Collins obviously went on to become a Hollywood leading lady, and it is this period of her life along with the years that ensued that Collins opens up about in her one-woman show.

“It goes through my life as a young actress in England playing juvenile delinquent parts and runaway girls and girls who get pregnant by mistake,” Collins says of her show.

“Then it goes into my life in Hollywood when I did movies with Paul Newman, Richard Burton, Bette Davis, Bing Crosby, Bob Hope, and Gregory Peck and then my personal life and marriages a bit. And then, of course, it goes into a lot — a lot — of Dynasty. [Laughs] And it is all illustrated with photographs and home movies and clips from movies I did. It’s about an hour and 15 minutes of sheer entertainment. [Laughs] I think anyone who likes this business is going to like this a lot.” Not surprisingly, Collins doesn’t hold back when it comes to dissing on Tinseltown A-listers, some of whom impressed her and many of whom turned out to be major disappointments. In fact, Collins reveals that she had a frosty relationship with Bette Davis.

“When I did The Virgin Queen with her, I and five other girls between the ages of 18 and 21 played her ladies-in-waiting and she didn’t like any of us, so she stomped around the set being quite angry,” Collins says of her experience working with Davis.

“I had a scene with her and I was trying to lace up her shoe … and she kept wriggling her foot so I couldn’t do the shoe up and finally she kicked me clear across the set! That really annoyed our director, who said to me, ‘You’re thirty years younger than her! Do up the old bag’s shoes, for God’s sake.’” So I did and I gripped her foot … and she didn’t mess with me much after that. But she wasn’t much of a fan of young ladies. She was irascible. That’s hardly news to anyone.”

It was the late actor Gregory Peck who inspired Collins to open up about her life in such vivid detail onstage. “About 10 years
ago I was sitting next to him at a dinner. I worked with him and he was a very good friend, and he told me he had been going around doing this,” Collins recounts. “So many people always asked me about my life, and I have had a quite fascinating life, I guess. I mean, I’ve been so busy living it that I haven’t really concentrated on thinking about how fascinating it was. So I just sort of thought I’d like to do [this show]. And I love doing it.”

Though she is forthright and candid about much of her life in her new show, including her five marriages and her drawn-out legal battle over a manuscript with Random House — an experience that she says nearly gave her an ulcer — Collins still believes that some things should remain private.

“I think that, particularly in England, one of the reasons why people like me is that they don’t know everything about me,” Collins says.

“For instance, I wouldn’t dream of going on Facebook or Twitter. I have a website that says a lot about my life and my career, but I don’t do ‘Dear friends, I’m going to the supermarket today because I need a dozen eggs.’”

At age 76, with 13 books, a library of film and television appearances, and a string of awards and honors to her credit, Collins says she has no intention of slowing down on her work or cutting back on her jet-set life with her fifth husband, Percy Gibson, to whom she has been married since 2002.

“I believe that, as Auntie Mame said, ‘Life’s a banquet and most poor suckers are starving to death,’ Collins responds when asked why she continues to work so hard at this point in her career, when many of her contemporaries have bowed out of the game altogether.

“I really believe in living life to the fullest,, and as much as I love lying around on the sofa and watching TV, I’m not so keen on doing that all the time. I love acting, I love writing, I love performing, and I’ll just be doing that until a cruel reality decides it’s time for me to stop.”