Sonoma County is endowed with an embarrassment of riches as far as romantic spots are concerned (I mean, wine alone isn’t the only reason TripAdvisor recently named Sonoma the top wine destination in the U.S.)

However, of all the dreamy locales in Sonoma County, Bodega Bay ranks at the top of the list.

I arrived in Bodega Bay on a lazy afternoon after a casual and winding drive down the Bohemian Highway and Highway 1, followed by a stop at St. Theresa’s Church and the Potter Schoolhouse, both of which were made famous by Alfred Hitchcock’s landmark film The Birds starring Tippi Hedren.

Though the temptation to reenact the iconic scene from the film was strong as I sat there in the shadows of the two structures, the fact that neither building was nearly as close to the Bay as the film would have one believe was enough to throw me off my game (and probably spare myself and the locals another all-too-familiar, desultory attempt at recreating cinematic magic). 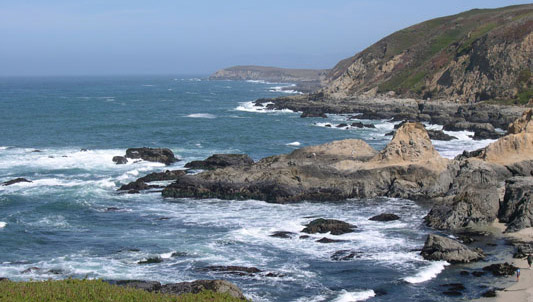 Actually, once I arrived at Bodega Bay Lodge, I was glad that I had not dawdled in town and had instead pressed on and arrived at the Bay earlier than anticipated.

The rustic Lodge is itself is tucked into a hillside kissed by both the Sonoma Coast and picturesque views of the Pacific Ocean and Bodega Bay. Remote and serene, Bodega Bay Lodge serves up an idyllic setting that is perfect for cementing questionable relationships, beginning new ones, or rekindling love matches in which the flame has begun to flicker.

For starters, to set the scene, each room has an ocean view and some, like the Ocean Club Suites where I stayed, also have private ocean view terraces with completely unobstructed views (Um yes … be still my undyingly romantic heart).

Despite the fact that the hotel property is quite expansive, from my vantage point, it felt as if there was not a single other person around (though obviously there was).  With a bottle of wine, a fire in the fireplace and the ocean as a backdrop, this suite was made for romance. I mean if this place doesn’t set the mood for an intimate evening for you and your significant other then I am not quite sure what could.

Complement your stay with a hike on Bodega Head and do a little bird watching or whale watching depending upon the season. Grab your partner and go horseback riding over the coastal dunes and sand beaches of Chanslor Ranch.

Take a romantic walk along Doran Park Beach the stunning three-mile stretch of sandy beach immediately in front of the Lodge and pack a picnic.

Book in at the spa and luxuriate in a treatment while looking out over the Pacific. And by all means, make a sunset reservation at The Duck Club Restaurant at The Lodge, request a table by the window, order a beautiful bottle of Sonoma wine and bask in the natural beauty surrounding you. Talk about pitch perfect … this is storybook kind of stuff.

As the madness of the holidays draws closer, why not whisk your boyfriend, girlfriend, husband, or wife, and dash off to Bodega Bay for a weekend? To say that love is in the air in this special corner of Sonoma County would be an underestimation of epic proportions.