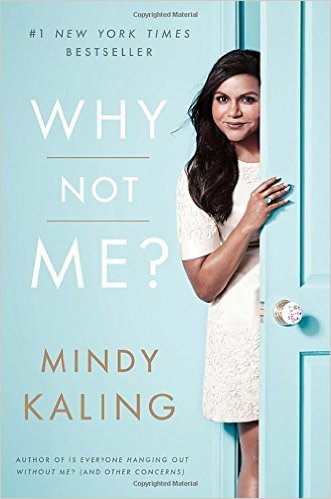 Mindy Kaling, the Emmy-nominated creator and star of The Mindy Project, has been nothing short of a revolution since hitting Hollywood. Not only has her insightful and unique brand of funny attracted legions of sympathetic fans, her starring role as Dr. Mindy Lahiri has re imagined the possibilities for female comedians of all stripes on the small screen.

And yet, for all these achievements, the quality that has most frequently made Kaling a hot topic of water cooler conversation is her size. Standing 5’4” and described by Vogue as a fluctuating size 10, Kaling has frequently been caught in the crosshairs of the current debate about size and shape in America because she neither fits the mold of traditional Hollywood starlet nor does she dress the part.

Rather than shy away from the subject of her frame, Kaling has embraced it with rip-roaring humor first in her New York Times bestselling book Is Everyone Hanging Out Without Me? and now with head on aplomb in her most recent tome, Why Not Me?. An angsty, thought-provoking, intensely personal, impossible to put down read, Why Not Me? is Kaling at her unabashed best.

In her latest collection of essays, Kaling pokes fun at the glamorous world of Hollywood and her role in it, her ongoing battle with self-image which she approaches with self-deprecatory zeal rivaling that of the legendary Joan Rivers, and the difficulty of building real relationships in a town held together by glitter, Botox and array of sly beauty tricks.

In one of the book’s most memorable chapters, “How to Look Spectacular: A Starlet’s Confessions,” Kaling with rare honesty lays bare all the beauty secrets that help her achieve a magazine cover ready look. From hair color, undergarments and body make-up to hair extensions and spray tans, Kaling offers a hilarious exposé on the beauty regimens that necessarily happen behind the scenes to ensure that actresses like herself appear to be the goddesses we worship in magazines and on television. She strips away the artificial while reveling in it, all the while winking at the reader as if to say “it’s all make believe people and I’m in on the joke.”

That said, the great charm of Why Not Me? is Kaling’s casual conversational writing style. Reading the book is akin to reading a great gossipy email from a close girlfriend who just happens to have the inside track on all of Hollywood’s biggest secrets. Sure she’s a big star, but it is Kaling’s ability to write about her experience with stardom with the awe of an outsider that makes reading her books so appealing. She’s the best friend who made it, your friend from college who works on a hit show, that funny friend who you feel proud of every time you see her pop up on the red carpet and so much more. And you just can’t help but root for her.

A perfect pick me up or beach read, Why Not Me? is the perfect accessory for your Spring/Summer 2016 getaway.