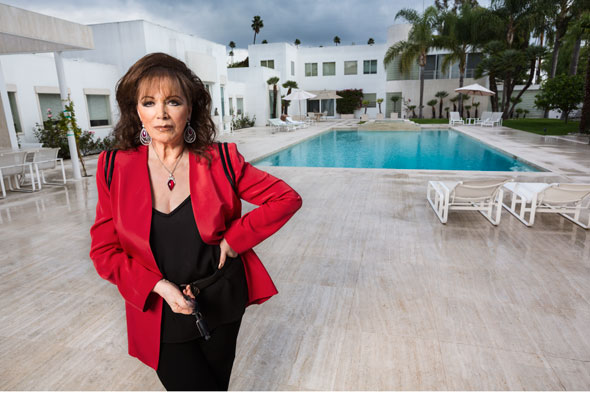 There are days when even I think I’ve picked a pretty good gig in this life, and this is definitely one of those days. As I sit down to write this week’s blog, I am contemplating what a journey life can be. It really is sort of a—well, trip, when you think about it.

When I was barely 10 years old (if that), I somehow got my hands on a tattered old copy of Jackie Collins’ novel The Bitch, ripped the cover off of it (so my mother wouldn’t know what I was reading) and read the book from cover to cover in a day. I couldn’t put it down. Not only did it inspire me to read, it inspired me to write. 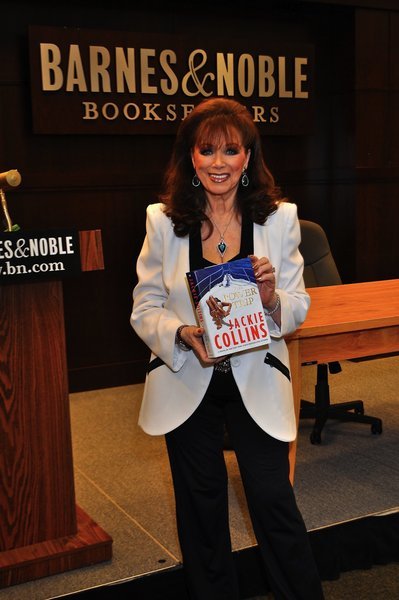 Flash forward to the last several years. I’ve had the opportunity to interview Jackie Collins a few times. For one of those chats, I even visited the best-selling author’s palatial digs in the flats of Beverly Hills, where I sat with her in the space where many of the characters in her best-selling novels have been birthed. In addition to being great fun, Jackie is also, as you might imagine, an amazing raconteur, so conversation has always been easy. And each time we’ve met, we’ve always had a good laugh about her books, Hollywood and music—especially music, because Jackie loves music.

Not once have I walked away from a conversation with Jackie Collins without her reeling off a list of new music for me to check out. She loves R&B—everything from Bobby Womack to Robin Thicke—and she knows it intimately, right down to the remixes, so it came as no surprise to me when I ran into her at the cocktail reception preceding Clive Davis’ listening party for the final album of Whitney Houston at the Beverly Hilton. Of course she would be there. The worlds of Hollywood and music collided that afternoon, so it was an event tailor-made for Jackie Collins.

Tonight, as I sat at the London Hotel in Los Angeles, where Jackie hosted a launch party for her sexy new best-selling thriller The Power Trip, I was thinking the real power trip was how I somehow got from the North Side of Jacksonville, Fla., to the chic dining room at the Ramsay sitting across from Jackie as she dished about Tinseltown, sex and “kicking ass,” subjects in which both she and are characters are very well-versed.

Talk about a journey! For half a minute, I drifted away from Jackie’s conversation and remembered the little boy who had read her big bad words for the first time all those years ago, and it was a little surreal. The fancy sophisticated lady whose picture I had seen on that book jacket all those years ago was a few feet away from me, and I actually kind of knew her. For a second, I felt like a character in a Jackie Collins novel (a lesser character, but a character nonetheless), and I was a little struck.

When you live and work in Hollywood, you have these moments a lot. They are fleeting but nonetheless real. And, though some people don’t like to acknowledge them for fear of not seeming cool, I do, and this was one of them. And that’s that. Now back to The Power Trip.

Collins’ latest tome, which was just released in the U.S. after having already become a best-seller in the UK a few months back, is a wild ride of a read, set not in Beverly Hills or Hollywood this time around but instead on a state-of-the-art luxury yacht. And trust me, there’s more action happening on this yacht on this one trip than most people experience in a lifetime on dry land. Because I don’t want to be a spoiler, rather than write my own synopsis of the story, I’ll use the spin from the book’s press release to introduce the story: 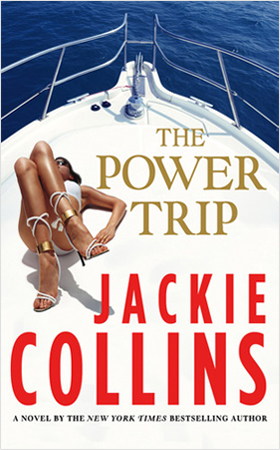 In The Power Trip you will meet Aleksandr Kasianenko, a billionaire Russian oligarch, as he sets sail on The Bianca. You’ll meet his sexy supermodel girlfriend, whom The Bianca is named after, and five dynamic, powerful and famous couples invited on the yacht’s maiden voyage: Hammond Patterson, a driven Senator, and his lovely but unhappy wife, Sierra. Cliff Baxter, a charming, never married movie star, and his ex-waitress girlfriend, Lori. Taye Sherwin, a famous black UK footballer and his interior designer wife, Ashley. Luca Perez, a male Latin singing sensation with his older, decadent English boyfriend, Jeromy. And Flynn, a maverick journalist with his Asian renegade female friend, Xuan.

You will also meet Russian mobster, Sergei Zukov, a man with a grudge against Aleksandr. And Sergei’s Mexican beauty queen girlfriend, Ina, whose brother, Cruz, is a master pirate with orders to hold The Bianca and its illustrious rota of guests for ransom.

Sold yet? You should be. Jackie Collins wrote the inspirations for series like Revenge decades ago with characters like Lucky Santangelo, and she invented The Real Housewives of Beverly Hills before there was even a Bravo network with her books likeHollywood Wives and Hollywood Husbands. The Power Trip is another in the best-selling storyteller’s long list of before-their-time page turners, and it is the perfect read for your next trip. Just be prepared to dig into the addictive tale of power, wealth and consequences, because once you start it, I doubt you’ll be able to put it down. But then again, it’s a Jackie Collins novel, so would you ever expect anything different?

Order the book and take Jackie Collins’ The Power Trip by visiting jackiecollins.com/book/the-power-trip. Also be sure to check out the audiobook for The Power Trip  available on Macmillan Audio where Jackie herself reads the book along with a full cast of characters. Here’s a clip:

And never forget that one of the most exciting parts of Living Wells is always remembering where you came from, because without a touchstone to ground you, you can’t always appreciate where you’ve been—or where you’re going, for that matter. Until next time…be well…live Wells!