There are those exceptionally memorable times in life when all just seems to gel perfectly. You know the ones—those rare occasions when you find yourself wiggling uncontrollably with anticipation like a puppy laying eyes on a furry ball for the very first time.

Well, one such moment occurred for me just recently when I, along with a group of other journalists from North America, was invited to Afternoon Tea with Lady Ashcombe at the historic Sudeley Castle in Gloucestershire.

Now, to fully understand the import of the moment for me, you also need to understand that all my life I have had a sort of ‘to the manor born’ mentality despite my ‘to the apartment rented’ reality. Yet last week on a rainy, gray day, there I stood … to the castle invited … in the award-winning gardens of Sudeley Castle with the lushly green Cotswolds Hills staring down at me. I could not have scripted the whole affair any better.

Devout students of Tudor history and fans of Showtime’s The Tudors alike will find much to be intrigued by at the more than 1,000-year-old Sudeley Castle. Not only was it the home and final resting place of King Henry VIII’s sixth wife and widow, Queen Katherine Parr, Sudeley Castle’s storied history is marked with everything from visits by King Henry VIII, Anne Boleyn and Queen Elizabeth I to its seminal role as both a prisoner of war camp and ‘safe house’ for much of the Tate Gallery’s art collection during World War II. History aside, perhaps the most fascinating thing about Sudeley Castle is its very Downton Abbey-esque contemporary existence as a working castle and the primary family home of Lord and Lady Ashcombe along with her children from a previous marriage.

So, the story goes, after passing through a series of royal and noble hands for centuries, Sudeley was purchased in 1837 by the wildly successful brothers John and William Dent, who had made a fortune in the glove-making trade and began the restoration of the then-decaying castle. The brothers then left the castle to their nephew John Coucher Dent, who married Emma Brocklehurst, who devoted herself to completing the restoration of Sudeley until her death in 1900, when the castle was bequeathed to Emma’s nephew Henry Dent-Brocklehurst.

Through two World Wars and dramatic shifts in fortune, Sudeley Castle has remained in the Dent-Brocklehurst family since that time, a feat that has in no small part been accomplished due to the ingenuity and tenacity of its current American-born mistress, Lady Ashcombe. Over tea, Lady Ashcombe recounted that, despite being taken with Sudeley Castle when she first visited it in the early ’60s, she had little desire to live in the grand, if decaying, estate when she married her late stockbroker husband Mark Dent-Brocklehurst. In fact she was enjoying her life in London so much at the time, she was a bit taken aback when her husband’s mother suddenly announced that she was leaving the house to the care of her son and his young family in the late ’60s.

To support the repair and ongoing maintenance of the massive estate, Lady Ashcombe (then Elizabeth Dent-Brocklehurst) and her husband embarked on a two-year renovation of Sudeley, with the goal being to throw open the doors of the estate to the public. Shortly after the renovation was completed, however, tragedy interceded. Mark Dent-Brocklehurst suddenly died of a heart attack, leaving his wife to raise their two young children while managing the death taxes, the castle and its new dual status as both a private home and tourist attraction.

Undeterred, the young Elizabeth Dent-Brocklehurst, who would later marry Lord Aschombe in the 1980s, continued what she and her husband started and her perseverance paid off. Today Sudeley Castle remains one of the most popular and spectacular tourist attractions in the Cotswolds. 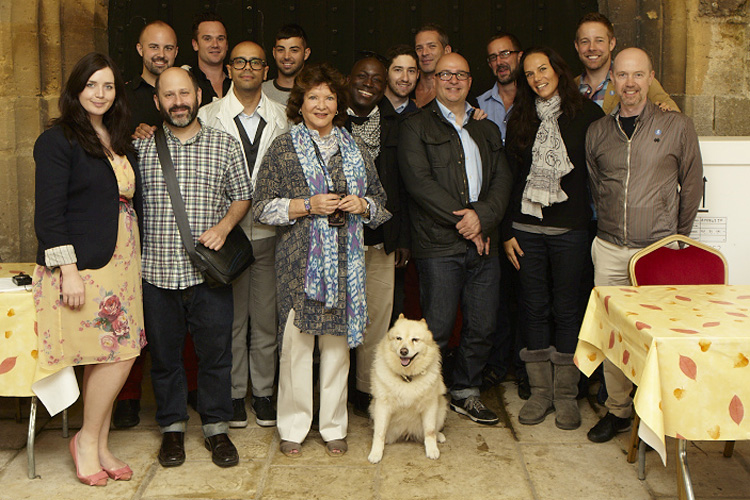 It is absolutely fascinating to stroll through the rooms of Sudeley, where history and modernity commingle so effortlessly. Framed family photos dot antique tables, while the works of old English and Dutch masters nuzzle up next to flat-screen televisions and walls lined with bookshelves containing first editions of the likes of Dante’s Inferno. It is perhaps this continuing life in the castle—its living history, if you will—that make it most appealing. Sudeley Castle is more than a historical relic—it is a representation of the brilliant passage of time, of centuries of history that continues to be written to this day through the very personal stories and lives of Lady Ashcombe and her family.

All year long, Sudeley Castle is celebrating the 500th anniversary of Katherine Parr’s birth with a season-long festival of events including talks from renowned historian Dr. David Starkey, Michael Hirst, creator of Showtime’s The Tudors, and author Alison Weir.