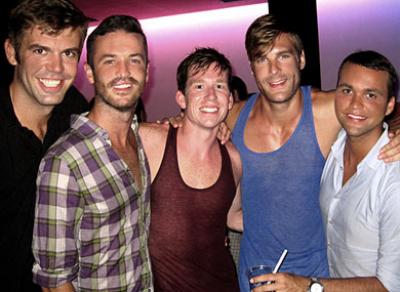 What started out as a few good friends setting out to create a memento of their summer getaway on Fire Island has turned into an Internet sensation that has been simultaneously racking up thousands of hits on YouTube and lighting up the blogosphere.

When New Yorkers David Fudge, Ted Donath, Colin Stark, Brian Davidson, Richard Davis, Ryan Slyper, and Justin Garlinghouse decided to take a Flip mini digital camcorder and hit the beach to make their own summer party video, using Miley Cyrus’s new single “Party in the USA” as their soundtrack, they had no idea so many people would pay attention.

But that is precisely what happened.

Only one day after the video hit the Web, gossip scribe Perez Hilton had already posted the video on his website and teen pop diva Cyrus had tweeted that she was “obsessed” with the feel-good parody of her latest hit. Even more telling is the fact that, as of Wednesday morning (three days after its debut), the video had garnered over 150,000 views — and David, the mastermind/director behind the clip, had scored nearly 1,000 subscribers to his YouTube channel. All of which suggests that the video — which is humorously titled “Party in the FIP” — is not simply a sensation, it’s a smash hit.

“I never imagined that this video would get so much attention, especially in such a short amount of time. And not just in the U.S., but all over the world,” David told Advocate.com, seeming a bit bewildered by the video’s popularity. “It started out as just a fun project, and now we have hundreds of people asking us to make more.”

David’s sentiments are echoed by his partners in crime in making the video, who are all equally nonplussed by their instant Internet celebrity. Richard notes that he is “thrilled that people are able to relate to… great friends enjoying an even better vacation.”

Brian seconds the sentiment: “I never thought my summer vacation would be seen throughout the world!”

Along those same lines, Justin chimes in to say, “Making this video was truly a blast. I was honestly shocked to see how many people not only viewed it online but also really enjoyed it! I’m so happy to see that we’re not the only ones who think our crazy antics are funny.”

Meanwhile Ryan, who admits that he didn’t know the lyrics to the song prior to the shoot and had to be “fed his lines,” initially had some reservations about how quickly the video was catching on with folks across the worldwide Web. But he soon got on board. “After an hour or so of regrets, I realized that we are just a group of guys having a summer of sun, fun, and Miley,” he says. “It’s all fun and games until you are rolling around the beach in a Speedo lip-synching for your life.”

Asked why they decided to make the video, the guys all agree that they just liked Miley’s “Party” single and thought it was the perfect song for summer vacation 2009, but Colin offers one further reason. “Well, since we couldn’t be a part of Destiny’s Child, we decided to make our own video. I’m excited to see so many people noddin’ their head like yea to our video,” he says.

As for what comes next, David says they’ll “keep making [videos] as long as people keep enjoying them.” However, they’re in no hurry — just as this first video happened organically, they expect that any future clips will happen in the same way.

“This was done in a spirit of fun,” says Ryan. “And any other videos will be done in that same spirit.”

See the clip below: